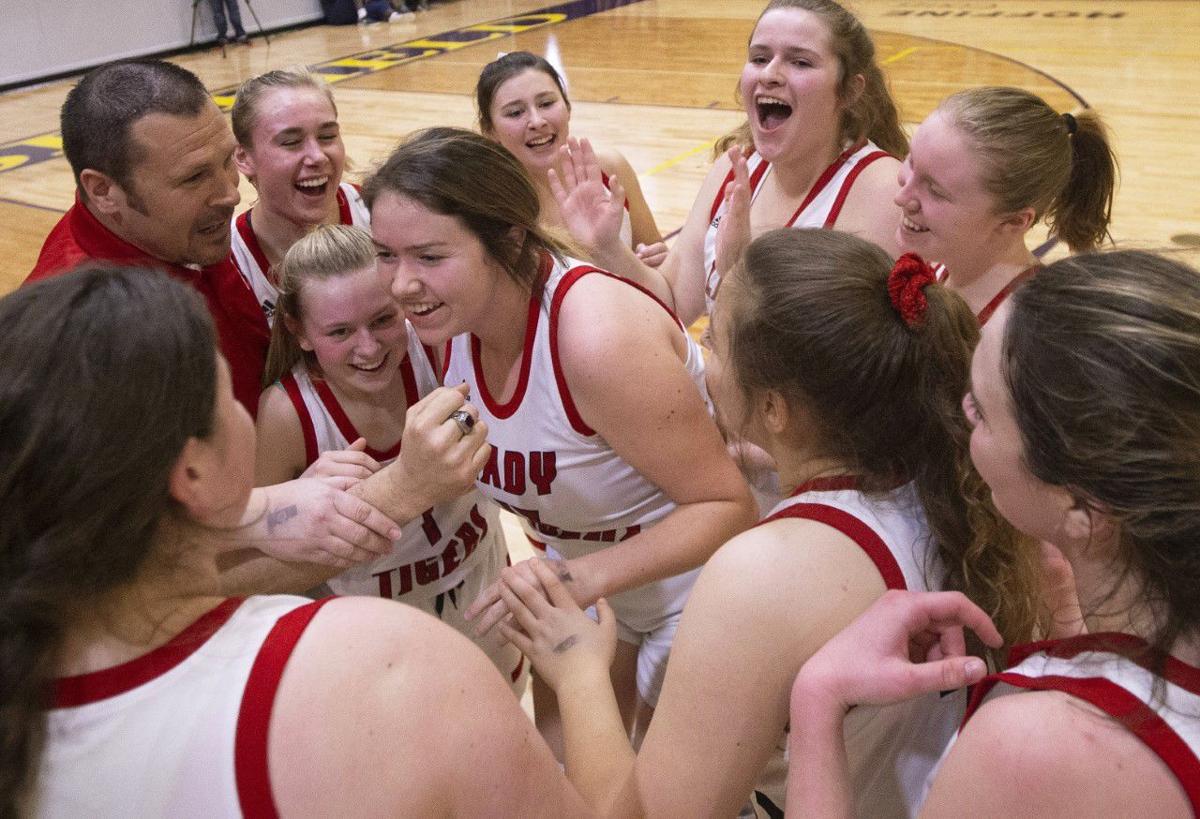 The Clatskanie girls basketball team celebrates its win at the state 3A semifinal game March 7, 2020. They went on to win state, but haven’t been able to get back on the court to defend it this year. 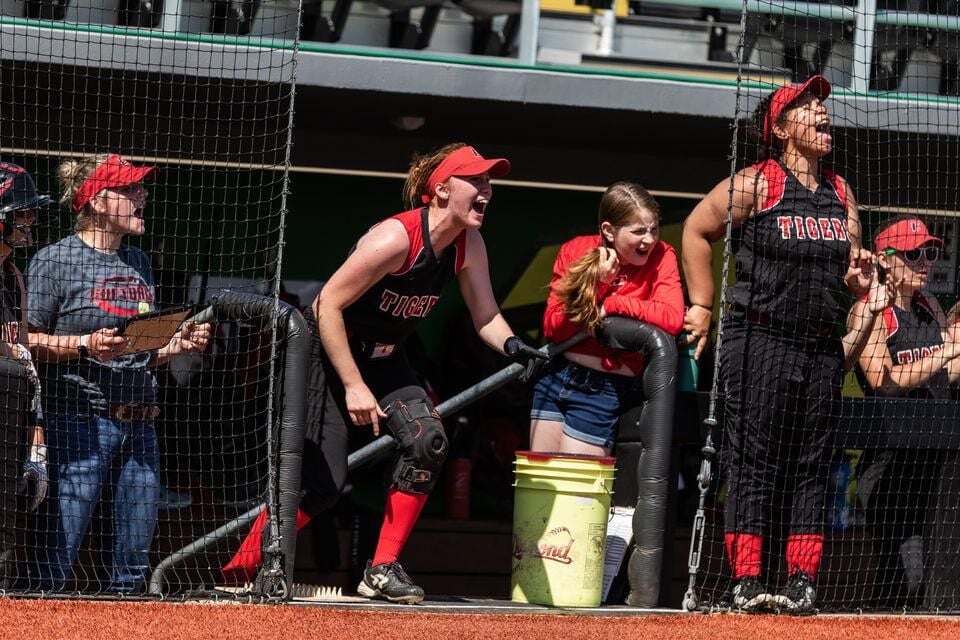 Senior Alexis Smith and the Clatskanie softball team don’t have the opportunity to go for a second state championship title this year, nor did they last year.

The Clatskanie girls basketball team is in a unique position. For two years, the Lady Tigers won game after game on their road to state. And for two years they took home the state title. Then the pandemic hit.

Now, nearly a year after schools first closed and sports seasons were initially delayed, the team has two back-to-back championship titles with no chance to go for a third.

Olivia Sprague is a senior at Clatskanie Middle/High. She has played sports in Clatskanie for as long as she can remember. She started young— playing in youth leagues and local tournaments— and joined the basketball and softball teams in high school. She was a member of the basketball team that brought home the first ever women’s state championship to Clatskanie in 2018, a proud memory of overcoming odds. Even further, the team did it the next year, too.

“Winning that second championship was just as great as the first one,” she said. “Us winning once again only reinforced that we deserved to be there and took away any doubt that the year before was just luck.”

After riding the high of back-to-back victories, the pandemic was unexpected.

“This was supposed to be the beginning of our junior year success, as we planned to go back to back in softball as well, but when we got home everything was different,” Sprague said.

Instead of having a community celebration in honor of the team, people across the state were instructed to stay home and limit time around others in order to contain the early spread of COVID-19. Sprague, like many others at the time, didn’t expect the pandemic to span as long as it has.

“I figured we would be out for two weeks, then return after spring break, and life would remain normal,” she said. “Never in a million years would I have guessed that I still wouldn’t go back to school one year later.”

A different kind of year

Ryan Tompkins, athletic director of Clatskanie School District, has been navigating the tumultuous year of sports schedules and adapting plans as restrictions have changed. A big part of those schedules, and sports seasons at large, is factoring in the final weeks of play offs leading to championship games.

As the restrictions have changed over the last year, affecting what is and is not allowed on school campuses, Tompkins said he and other athletic directors have been left with questions. For instance, are teams limited to playing teams in the same county, or teams in counties at the same risk level? Will there be state championships?

He said it’s been difficult on the athletes. Some of the teams, like the girls basketball team, were able to squeeze in their seasons last year, but spring sports were not as lucky.

“The softball team felt like it missed out on that, feel like they’re currently missing out,” he said.

Senior Alexis Smith has dabbled in different sports and been playing since she was in kindergarten, though basketball and softball have been her main interests.

“Basketball and softball I have played throughout my high school career until COVID said ‘Yeah, no. Not this year,’” Smith said. “It was very heartbreaking to me, softball is a huge part of my life and not being able to defend the title my teammates and I worked so hard for was a real let down.”

The momentum the teams had been building has halted as restrictions on what is allowed have changed. At this point, any form of traditional state championships is likely out of the picture.

“It sucks, because even if we do get to play somewhat of a season we most likely won’t be able to try again for the state title and it takes away from my ideal high school experience,” Smith said.

All the sports teams have had to reckon with this loss of time, much like all the students have had to adapt to online learning, but for the girls basketball and softball teams it means missing out on defending their titles.

“They’re one of the more accomplished groups of student athletes, this 2021 group of girls,” Tompkins said. “Some were pushing records that haven’t ever happened in the state.”

Shelby Blodgett, a senior on the basketball team, was approaching the state record for rebounds. The state record is 1,642 and at the end of her junior she amassed 1,316 rebounds, averaging 15.8 per game. With her average, and the number of games in a typical season, she was on track to shatter that record. But she never got the senior season to do so.

Despite the interruption to their senior years, both Blodgett and Sprague secured athletic scholarship and signed with Oregon Institute of Technology to play basketball. Sprague is also joining the school’s softball team. Smith signed with Lower Columbia College to play softball.

“Even my class, with everything being shut down in March, really impacted us because we couldn’t go do campus visits,” Smith said.

In normal years, student athletes are exposed to college coaches and recruiters through games, whether through school or private leagues. Sprague played basketball in the Amateur Athletic Union, which helped her connect to college coaches. Showcase camps and exposure tournaments also served as a way for her to get noticed.

For the younger generation of student athletes coming up behind Sprague and Smith, students will have to rely more heavily on videos and digital connections to coaches and schools until more in-person events come back. It will be tough and impact the recruitment process, Sprague said.

“It isn’t easy to rely on old films or just sell yourself with your own words,” she said. “Along with this, missing an entire year of playing is detrimental to an athlete considering the amount of growth that can occur within that period.”

Another impact on the recruitment process is from the collegiate athletes who have missed a year or season of playing. Some schools have extended their seniors an extra year to continue to play as they finish school, meaning there’s less room for new players to join, Tompkins said.

“There’s kind of a backlog at the collegiate level of college athletes,” he said. “There’s a limited number of scholarships to hand out.”

The loss of their seasons that Sprague and her teammates have felt is passed down to younger students, some who haven’t had the chance to compete at state or have an uninterrupted sports season in high school.

“I feel for my younger teammates in this aspect because, as I said, a year is a massive amount of time in which an athlete can grow,” she said. “But also, missing a season of sports lessens the exposure you are getting to next-level coaches.”

She added that the students she feels for the most are the kids in elementary and middle school. The ones who haven’t had the chance to try out different sports and find the ones they like, because they’ve been at home for the last year.

“A year lost might be interest lost,” she said.

While anything resembling a traditional school year has been thrown out the window, sports aren’t entirely absent from Clatskanie. Tompkins has been holding practices throughout the year, as allowed based on state guidance.

He said there has been a good turn out, even students who don’t usually play a sport will drop by the practice to get outside and interact with their peers. Right now the school is hosting cross country conditioning and football practice (with plenty of safety guidelines in place).