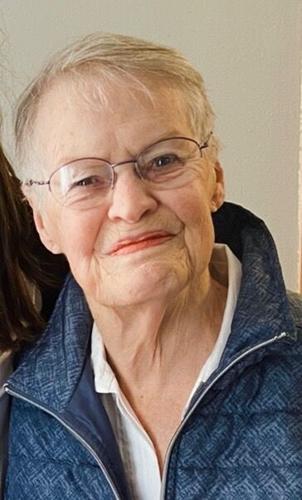 Born into a tough cold world in Filbrook, Minnesota on Nov. 20, 1934, Elsie Louise Anderson was the first child of Donald Smart and Alice Fisher. Both came from good sized families of seven and three kids, and later came the resultant cousins. She passed away at home on May 11, 2022 surrounded by her loved ones.

The family lived in Clatskanie where Mom went through all 12 grades of school and developed many lifelong friendships. She worked at Humps Restaurant and met Donald E. Anderson, Dad, when she was 19. They were married on December 20, 1953 and were rumored to hold Valentine’s Day in high regard, as Michael was born on November 10th, 1954 followed by Crystal on November 25th, 1955 and then Randy on November 25th, 1956! One child miscarried, the next year Robin was born September 27th, 1960. It was a full house, full of mischief and never-ending activity.

Mom loved to bake and not a breakfast, lunch or dinner can be remembered without dessert of some kind. Cookies, maple bars, cinnamon rolls, cupcakes, cakes, doughnuts and pies! Pie was her forte and every person she worked with or that her children worked with, or extended family never turned down a pie she made! She had a pie crust that was taught to her by Grandma Anderson, who she looked up to for many things.

Her lifelong friends came from the neighborhood and her work at the 5J School System, where she cooked for several years and then became the Secretary at the new Quincy School the year it was built. She loved the job, her co-workers and the students. Even as late as her last few months, if a child’s name came up, she would remember a story or a triumph or something that child did well, or humorously, or something they had overcome.

Vivacious, industrious, engaging, thoughtful, funny, loyal, complex, and simple. She went out of her way for many families in the community that had less to live off of. Food, money, transportation, or an hour spent over coffee, were shared with anyone needing a hand up. But no one got the gifts piled up like her family! Dinners, desserts, clothes, mended, quilts, veggies from the garden, gas money, school money, walking around money, whenever she was aware of it, she found a way to give.

The Anderson family was fairly large with mom having two sisters with three kids, and Dad having five brothers and sisters with 25 kids! The get togethers were always fun and exciting and happened regularly. Mom reveled in the family chaos and would manage any size of party. Dad called her the Chief Cook and bottle washer as a little funny dig, but she did dishes and cleaned with the same enthusiasm as creating a quilt or greeting an old friend. No one outworked her, until she was 75 or so. Too much energy to keep up with.

Upon retirement she got to see more of the things that time and money denied earlier. Colorado, Alaska, Iowa, Arizona, and the beaches of Oregon which were her favorites.

Mom was known for her Signature Whistle as she approached any house, door, or room to alert others she was coming. The whistle turned into a constant hum in later years, that was almost like a cat purring. Her hum was a reassuring contented sound to those around her and was just her singing to herself. The little hum continued until the last bit of energy was expended and the room dimmed with her exit.

The remainder of the family of Don and Elsie Anderson would like for any and every one who knew them to join us for the celebration of the life and times of Elsie Anderson at 1 p.m. on July 1, 2022 at the Clatskanie Legion Hall. There will be someone to read written remembrances, stories, and crazy times for those not wanting to read their own. Potluck, BYOB.

Hope to see you there, Mike, Crystal, Randy, Robin

To plant a tree in memory of Elsie Anderson as a living tribute, please visit Tribute Store.

If the election were held today, of the three candidates running for Oregon Governor, who would you vote for?

2022 Oregon Wage Information: What you need to know

2022 Oregon Wage Information: What you need to know