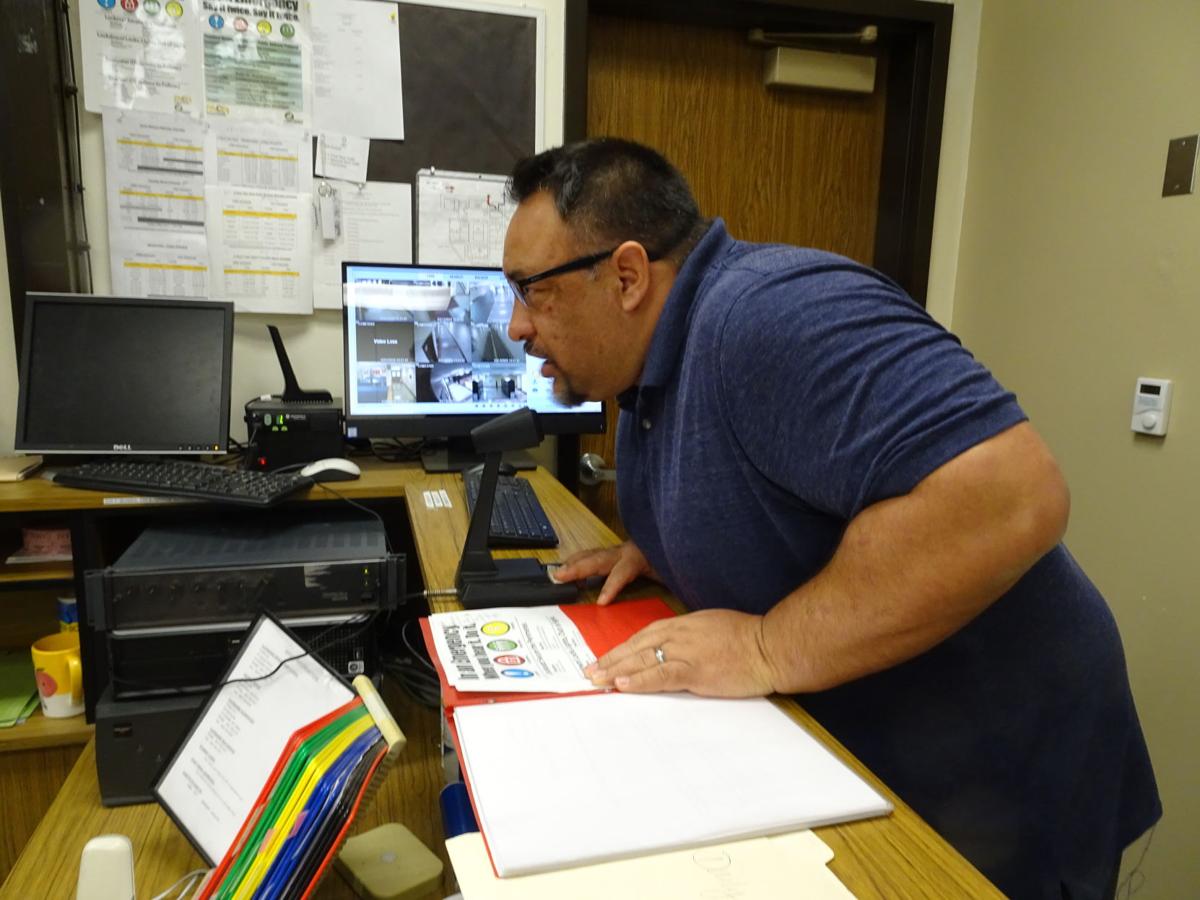 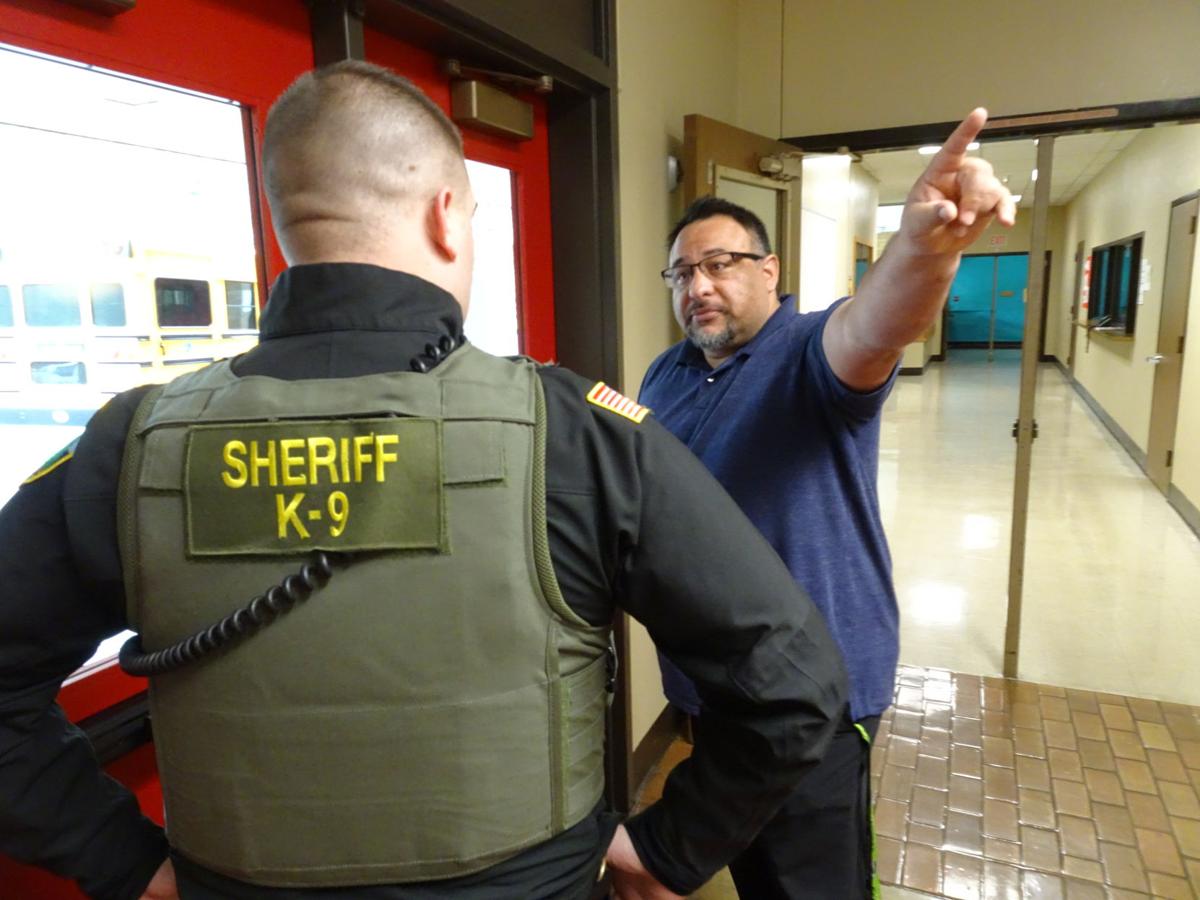 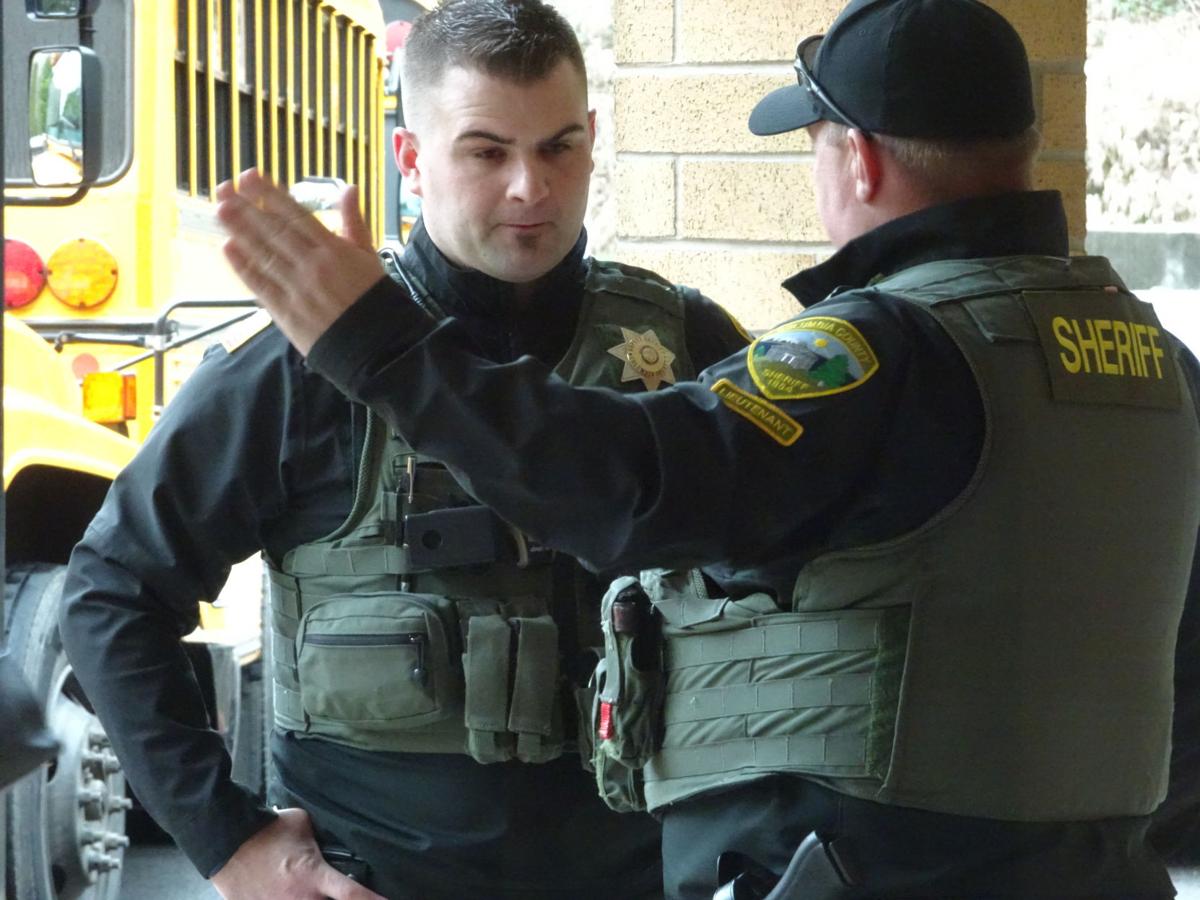 Columbia County Sheriff’s deputies arrive at the school and begin setting up security. 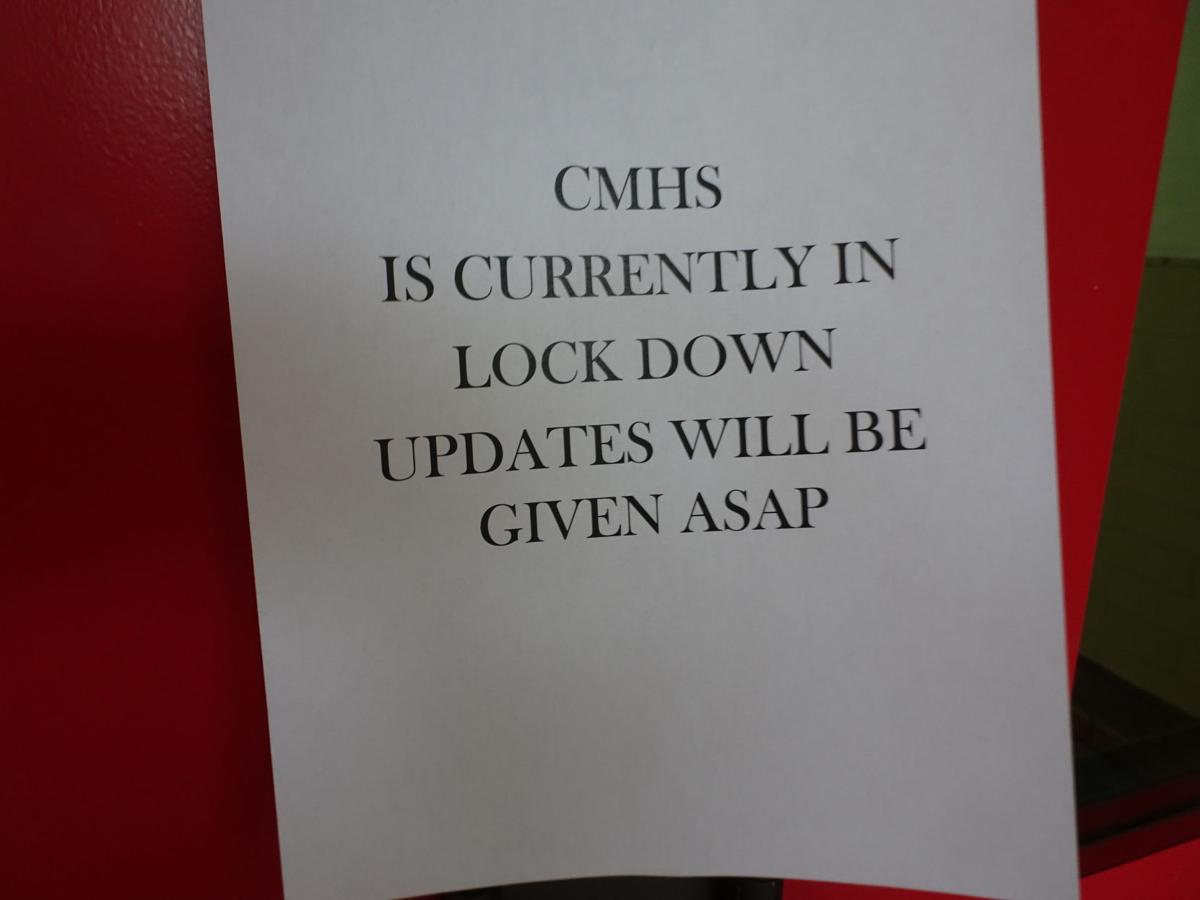 School officials posted the lockdown notice on all the entrances to the building. 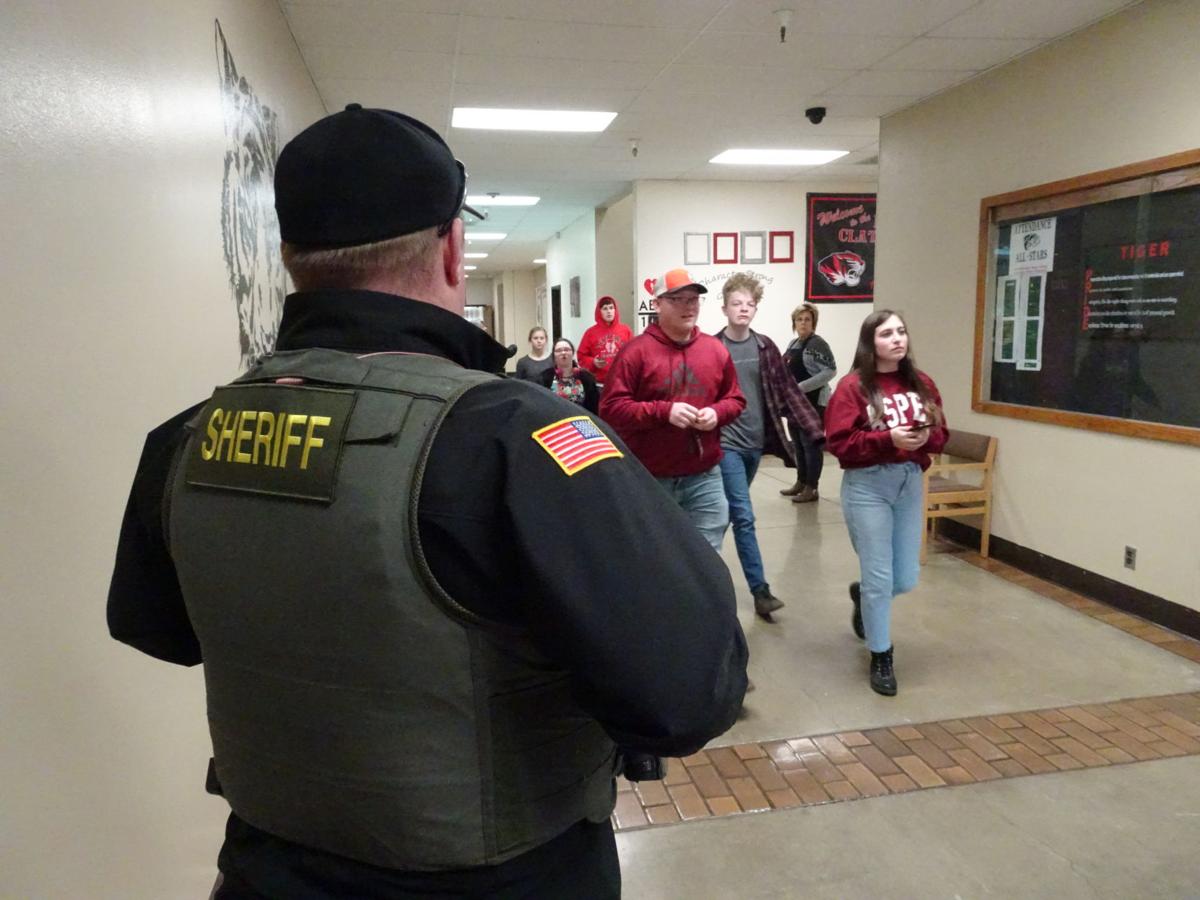 A Columbia County Sheriff’s deputy stands in the front hallway of the school as students are released during the lockdown.

Columbia County Sheriff’s deputies arrive at the school and begin setting up security.

School officials posted the lockdown notice on all the entrances to the building.

A Columbia County Sheriff’s deputy stands in the front hallway of the school as students are released during the lockdown.

The more intense security action took place on Wednesday, Feb. 12, when Principal Jim Helmen was shown a photo taken by a school staff member of the latest threat. Moments after seeing the photo, Helmen went to the school’s intercom system and announced that the school was in immediate lockdown.

Helmen told The Chief that the threat was to harm students but he would not elaborate on the specific wording of the threat.

The lockdown followed a similar, but less intense, lockout on Tuesday after a similar written threat was discovered at the school.

Helmen said his main frustration during the lockdown was the response time of law enforcement.

“We need to have law enforcement here,” she said. “Had there been deputies here sooner, we probably would not have had to release the students. We could have done a lockout, like we did on Tuesday.”

Helmen said the lockdown was triggered because of the response of law enforcement. Helmen said it was unclear at that moment of discovery of the latest threat how soon deputies would arrive on campus.

“We could not determine specifically when we could have law enforcement on site,” he said.

“The first is that the Clatskanie deputy did not come on duty until 2 p.m. and this call came out at around 12:45 p.m.” Pixley said. “Once we arrive on scene, the first thing we do is check the perimeter of the building to ensure the scene is safe, then contact school officials. Our main issue is the safety of the kids and the school staff.”

Pixley said the county is short of needed deputies for the increasing calls his office is receiving. Besides continuing his active recruiting for more deputies, Pixley said he’ll return to the county budget committee this spring with a request for more funding to meet the law enforcement demand in the county.

Hurowitz and Helmen said the Tuesday incident was less intense because deputies had arrived quickly after school officials alerted the Sheriff’s Office to the school threat.

“We had to have the lockdown because we did not have law enforcement here in a timely manner,” Hurowitz said.

“When law enforcement arrives they are very well trained, they are very supportive and that provides that extra element of security that we need to make sure students and our community knows that everyone is safe,” Helmen said.

The Wednesday lockdown was lifted, according to Helmen, once deputies arrived and began coordinating security efforts and the students were released.

“It was necessary to release the students because it’s a pattern of behavior and the deputies felt that needed to do a full investigation,” Helmen said.

As the investigation continued on Wednesday, deputies and school staff searched student backpacks and other belongings that were ordered left at the school as the students were released.

The search by deputies was an effort to find anything, such as weapons or evidence, that might lead to the person responsible for the threats, according to Hurowitz.

“We have a few names we are looking and the two incidents occurred in the same location,” Helmen said. “It’s the same style of writing, but we are making any guesses as to why it is occurring. We are taking every precaution so that we can determine whatever support we can provide the individual that is creating this issue.”

Helmen said when school began in September, the school experienced a similar threat.

“But we don’t know if these latest incidents are related to that threat,” he said.

Hurowitz said students have missed much instructional time due to the school threats.

“And every day counts with our children,” she said. “And it causes a lot of anxiety for parents when we talk about evacuation and moving kids out.”

Hurowitz said during the Tuesday lockout, students and teachers were working, but still parents came to have their children removed from the school.

“They were afraid and we would never stop them from coming to get their children, she said. “Then I was getting calls from parents saying they were bringing their kids back to the school, so during a lockdown it is more intense.”

During a lockdown students and teachers are secured in classrooms with shades down and doors locked.

Once sheriff deputies arrived during the Wednesday lockdown, Helmen directed them to secure specific portions of the campus and the school building.

As the lockdown ended, students were moved from classrooms to the main hallway and out the front door to waiting buses and parents.

Helmen said all school staff did an outstanding job during the lockdown.

“It went as well as it could go in a situation like this,” he said. “Procedurally, the school was safe.”

“What we have learned is that we need more cameras in our building but our communication systems seem to work pretty well this time,” Hurowitz said.

“These can be very traumatic events for any student and teacher,” Helmen said. “We practice these situations monthly in efforts to protect our students. Our staff is very well trained.”

A debriefing about the lockdown event was to be conducted with the district’s administrators on Thursday.

Two public schools in Clatskanie went into a lockout Wednesday afternoon, Feb. 26, after school officials said a threat was discovered at Clat…

Are you following Governor Brown’s order to wear a face mask in all indoor public places?

COVID-19: By the Numbers

On the Road: Behind the wheel safety

A Mask is Just a Mask: Statewide health safety campaign

COVID-19: By the Numbers

On the Road: Behind the wheel safety