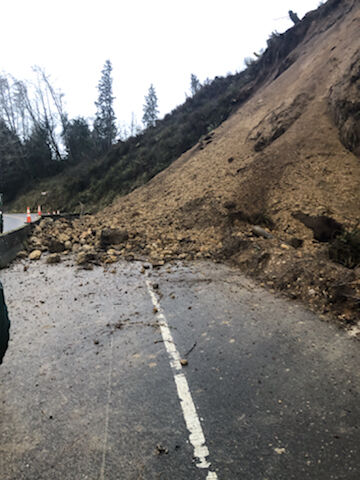 Debris from the hillside slid down and covered a portion of Highway 30 east of Astoria. 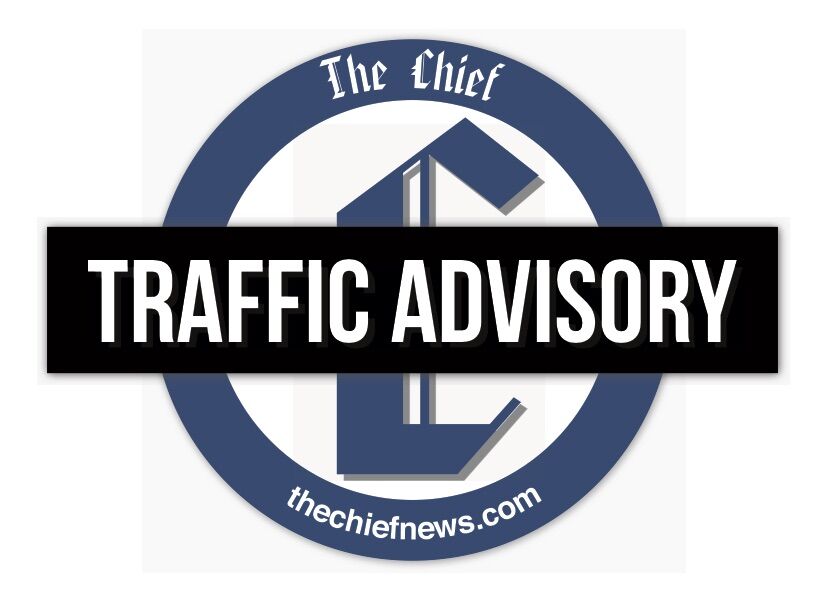 One lane of traffic will remain open indefinitely on U.S. 30 three miles east of Astoria where crews are working on a landslide that closed the road on Monday, Jan. 4.

Two-way traffic will continue to be controlled with flaggers. Any travelers through the area should be prepared for long delays, especially during peak travel times.

One lane of Highway 30 three miles east of Astoria is open following a landslide that closed the road late yesterday and last night. Flaggers will be controlling two-way traffic through the area for most of the day.

Today, crews will be continuing mitigation efforts and cleaning debris next to the road. Travelers should expect delays and plan additional travel time.

The Oregon Department of Transportation's Lou Torres tells The Chief that it is unclear at this time how much debris is being removed since additional work is necessary. Torres said the highway was not damaged by the slide.

"The cause is excessive rainfall the past few days and saturated soils," Torres said. "We have many places on state highways along the coast, in the coast range and in the Cascades where we can get landslides, mudslides, rockfalls, etc. After all this is Oregon where we get lots of rainfall that falls on steep slopes."

Torres said motorists need to pay attention when driving along Highway 30 and other routes in landslide areas.

"The message is that this is winter in Oregon," he said. "Keep both hands on the steering wheel, mind on driving and eliminate distractions. Be prepared for winter driving conditions which can mean dealing with wet and icy roads, snow, high water and possibly rock and mud slides."

Torres added that road closures during the winter are a fact of life in the region and can’t be totally prevented.

A landslide closed the busy highway on Monday, Jan. 4.

Oregon Department of Transportation geologists are working with the crews on the best approach for mitigating the slide issues. The road remains closed indefinitely, and only emergency vehicles will be allowed to pass through the slide area.

A mud/rock slide closed the road at 3:30 a.m. for about one hour. Crews were able to open the road at the time but returned to the site to do cleanup with flaggers controlling two way traffic, according the Oregon Department of Transportation. However, more extensive repairs are required which will keep the road closed indefinitely.

There is no formal detour established. Travelers should avoid the area, use an alternative route or expect long delays.

The slides are contained off the road and are being monitored by road crews, but drivers should use caution on this rural steep road today, the county said.

The Oregon Department of Geology and Mineral Industries (DOGAMI) said the landslides can be caused by several factors, including the type of geology, the slope and water. Rainwater buildup following frequents storms can lead to a landslide.

According to a DOGAMI executive summary report about the landslide hazards in Columbia County, landslides and debris flows are common in the Oregon Coast Range due to the combination of high precipitation, steep slopes, and landslide-prone geologic units. Cutting through the northern Coast Range, the U.S. Highway 30 (Oregon State Highway 92) corridor is prone to slope instability.

The study indicates that the Highway 30 corridor in Columbia and Clatsop Counties is at significant risk from landslide hazards. Landslides cover 25% of the study area, and 33% of the City of Clatskanie is covered by large, deep landslides. The large number of people and structures residing on these deposits highlights the potential danger present and shows the need for public awareness on landslide hazards.

DOGAMI lists the following for precautions and safety.

People, structures and roads located below steep slopes in canyons and near the mouths of canyons may be at serious risk. Dangerous places can include:

• Canyon bottoms, stream channels, and areas of rock and soil accumulation at the outlets of canyons.

• Road cuts or other areas where slopes of hills have been excavated or over-steepened.

• Places where slides or debris flows have occurred in the past.

According to DOGAMI’s A Homeowners Guide to Landslides, a landslide is the downward slope movement of rock, soil or debris. Debris flow, earth flow, rock fall, mudflow, mudslide, and slump are also terms for landslide.

Landslides can take human life. However, even a few inches of slope movement can disrupt septic, sewer and water lines and crack foundations severely damaging or destroying your home, according to the guide.

The guide also recommends actions property owners can take to reduce the chances of landslides, which include:

• Draining water from surface runoff, downspouts, and driveways well away from slopes.

• Consulting with a professional before significantly altering existing slopes uphill or downslope of your home.