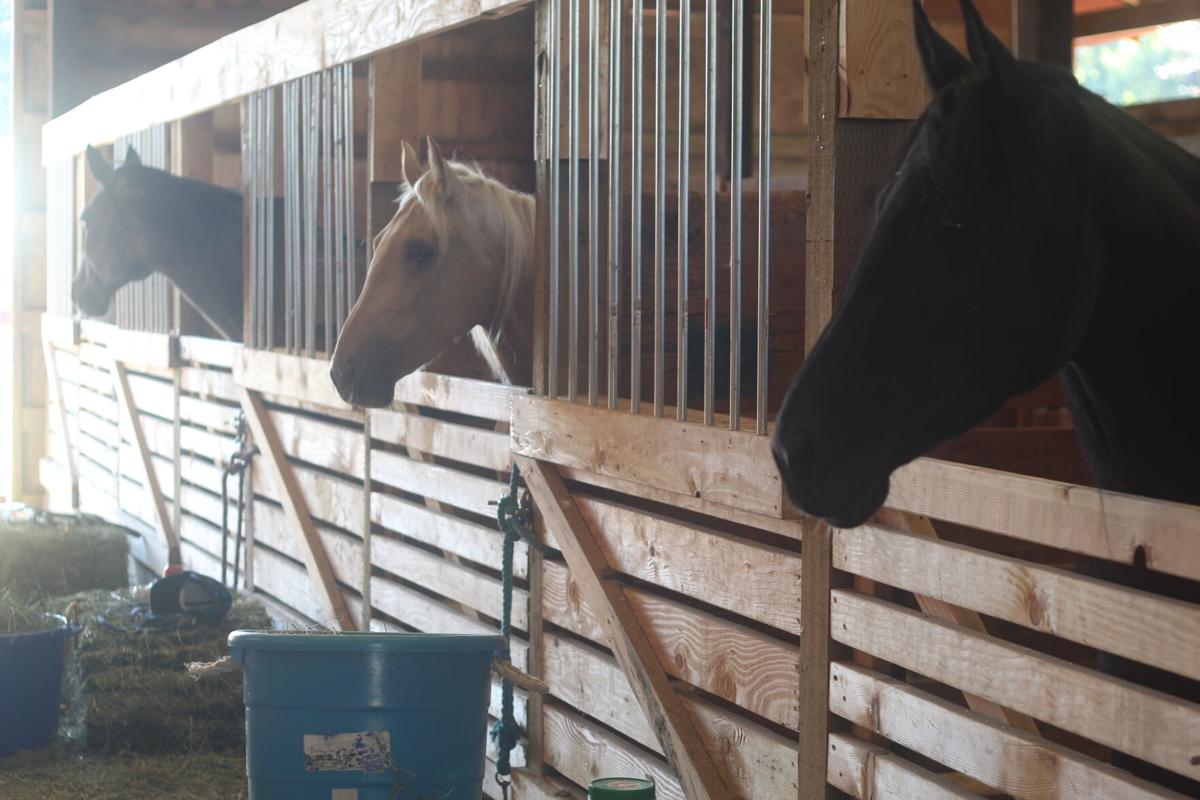 Horses, rescued from nearby wildfires, stand in their stalls at the fairgrounds. 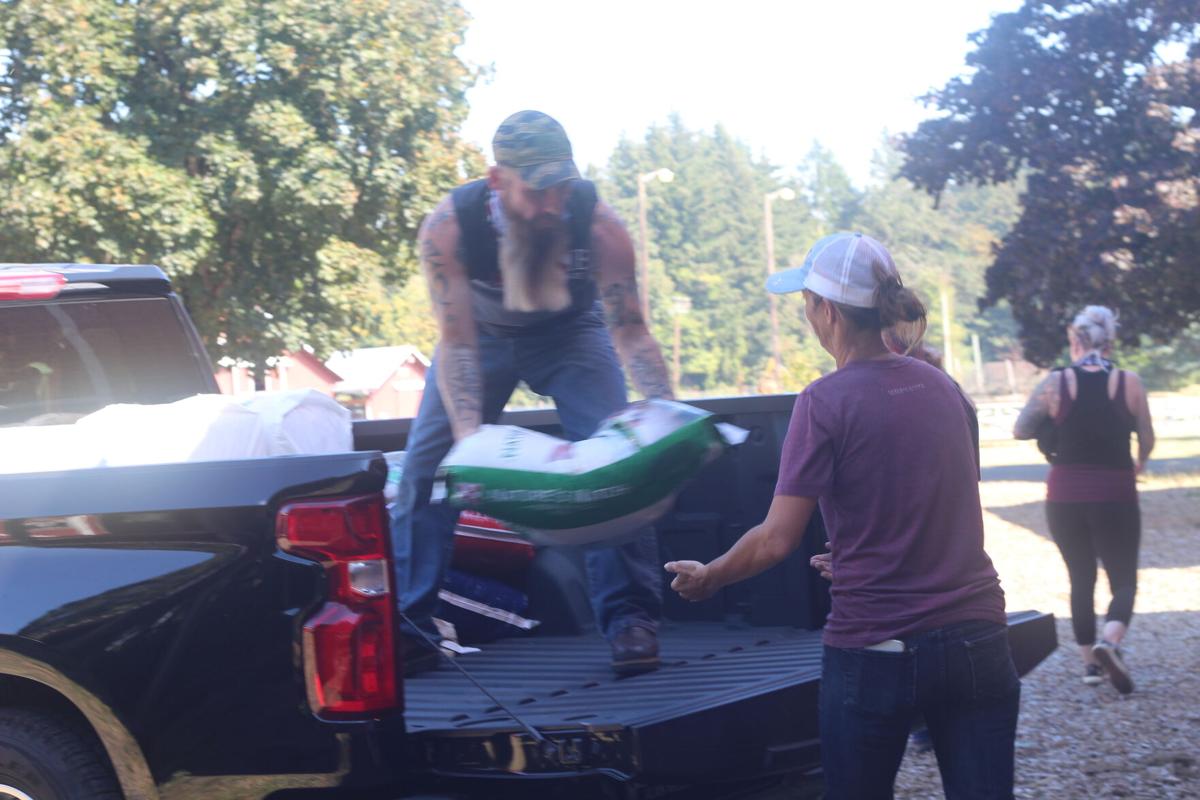 Volunteers unload a truck of donations for animals sheltering at the Columbia County Fairgrounds.

The Columbia County Fairgrounds, located at 58892 Saulser Rd. in St. Helens, is now serving as a makeshift animal evacuation shelter to support livestock displaced by wildfires around the state.

As of Wednesday, Sept. 9, the place was serving animals from eight to nine different farms, although that number grows larger by the hour, according to organizer Shana Cavanaugh. The place was also sheltering about 120 animals, mostly horses and pigs, but Cavanaugh said that would increase to about 200 animals by end of day Sept. 9.

The sheltering is necessary because of the raging wildfires across most of the state during the first full week of September that forced thousands to evacuate.

“In running the groups that I run, I started getting requests of if anyone was able to take in livestock,” Cavanaugh said.

Cavanaugh then told her mother, Julie Pelletier, who works on the fair board, who then made some calls to other board members. The action was set in motion, and at around 8 p.m. on Sept. 8, Cavanaugh, Miranda and other volunteers arrived, and worked through the night to get organized.

“We had pigs and horses in from Molalla and Beaver Creek, it took us all night to get those wrangled in here,” Cavanaugh said.

Cavanaugh said she didn’t take a break until 5 a.m., when she went home to rest for two hours before coming back to start feeding and taking care of the animals.

Calls have been constant since 5 a.m., Cavanaugh said, adding there were 70 more horses on their way from Estacada and Molalla. Animals run the gamut, including cows, alpacas, goats and lambs, according to Cavanaugh.

There is even a family coming over because their house was burning, and they will be staying in an RV park in the area, Cavanaugh said.

Using the animal stalls at the fairgrounds to shelter animals is not a new idea. MFCC had already been working with the fair board in order to start an animal rescue operation at the fairgrounds. According to Cavanaugh, they had received permission to move forward in conjunction with the Oregon Humane Society. Those plans have been halted in light of the current situation.

Already, the organizers have had a massive support of donations and volunteers, according to Cavanaugh.

“Literally everyone that can donate has donated,” Cavanaugh said.

Donors have included Dahlgren’s Feed & Builder’s Suppply, Linnton Feed & Seed and numerous pet stores in the area that have donated bedding, feed, supplies and numerous other items, according to Cavanaugh.

Volunteers have numbered in the 50s, with one of the most prominent volunteer groups being 4-H, whose service Cavanaugh described as invaluable.

There have even been volunteers to help the volunteers.

“The local food truck brought burritos to feed 50 volunteers today. It’s been an experience, a lot of people coming together really, really quickly to handle a dire situation,” Cavanaugh said.

The fairgrounds still has a lot of room for animals, according to Cavanaugh, and horses seem to be the main animal coming.

Sheltering will mostly be done on a first come, first served basis.

“If they’re at ‘go’ time at the time they call, we will hold stalls at the time, but we’re not holding reservations from people trying to do backup plans,” Cavanaugh said.

Cavanaugh said there is another barn of about 40 stalls available in the fairgrounds area and in the rodeo area there is room for another 100-200 animals. If the fairgrounds does not receive requests for sheltering cows, Cavanaugh said they can put horses in the cow barns, which she said she knew was not ideal for the animals but would be the best plan in an emergency situation.

Most of the care for the animals is done free of charge. If livestock owners can supply feed and hay, Cavanaugh said that is welcome, but not required.

“People had no notice, we’re not going to let any animals go unfed or uncared for or unwatered. We’re offering the space for as long as it’s needed for families that have evacuated,” Cavanaugh said.

Cavanaugh said she had no idea how long that would be.

Columbia County provides additional details about the fairgrounds shelter efforts in the following:

The Columbia County Fairgrounds in St. Helens is currently open to house displaced people and livestock fleeing from the rash of wildfires across Oregon and Washington.

“We are simply trying to be as prepared as we possibly can,” Columbia County Fair Board member Julie Pelletier said.

By Thursday afternoon, the Fairgrounds had sheltered sheep, cows, chickens, goats, hogs, around 30 horses, and several displaced families that are sleeping on the grounds in tents and trailers. The Fair Board is reaching out to the community for help with supplies for the evacuees.

“A lot of these people had to get out in a hurry," Columbia County Fair Board Member Laken Gortler said. "Maybe they didn’t have lead ropes and they just had to throw their horses in and go. Whatever you have that you think we could use, please bring it.”

The community is asked to pay attention to the Columbia County Fairgrounds Facebook page for additional needs as they arise. With the influx of additional animals, there are concerns about providing adequate space and volunteers to meet the workload.

“We need volunteers, prayers, and your support,” Pelletier said. “We need resources. If you have space for an animal or you can take in a family in need, please do. Sleeping bags are a need right now, tents – anything. If we get full, we’re one of the last places they can go.”

Volunteers with trailers are willing to pick up evacuees if necessary and they will also come to your house to pick up donations if you are unable to transport them to the fairgrounds yourself, according to a release from the fair board.

The Columbia County Fair Board is also asking for donations to help offset the cost of rising electricity and water bills.

“Our fair board is doing spectacular work along with the Grange and all of the local committees and commissions and folks that are helping out,” Columbia County Commissioner Henry Heimuller said. “The community support and donations of hay and feed from businesses like Dahlgren’s to Senator Betsy Johnson and a myriad of folks kicking in and coming together on this thing has been amazing. Our appreciation is 100 percent to the community.”

Wildfires around Oregon have prompted hundreds of thousands of residents to evacuate from their homes and travel to safer locations. 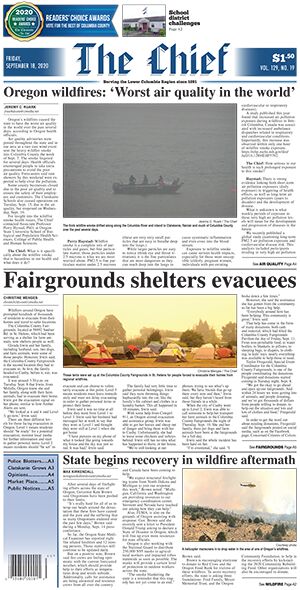