Local residents frustrated with the continued restrictions and limitations imposed by the state to slow the COVID-19 pandemic took their concerns to the Clatskanie City Council meeting Wednesday evening, May 5.

Clatskanie City Manager Greg Hinkelman said 50 people “who were very upset and angry over the continued lock downs issued by Governor Brown” attended the meeting to give testimony about Resolution 2021-01. The resolution is a council statement voicing opposition to the restrictions, supporting local businesses and supporting ballot measures limiting the duration and extent of the governor’s emergency powers. Read the full resolution attached to this story. 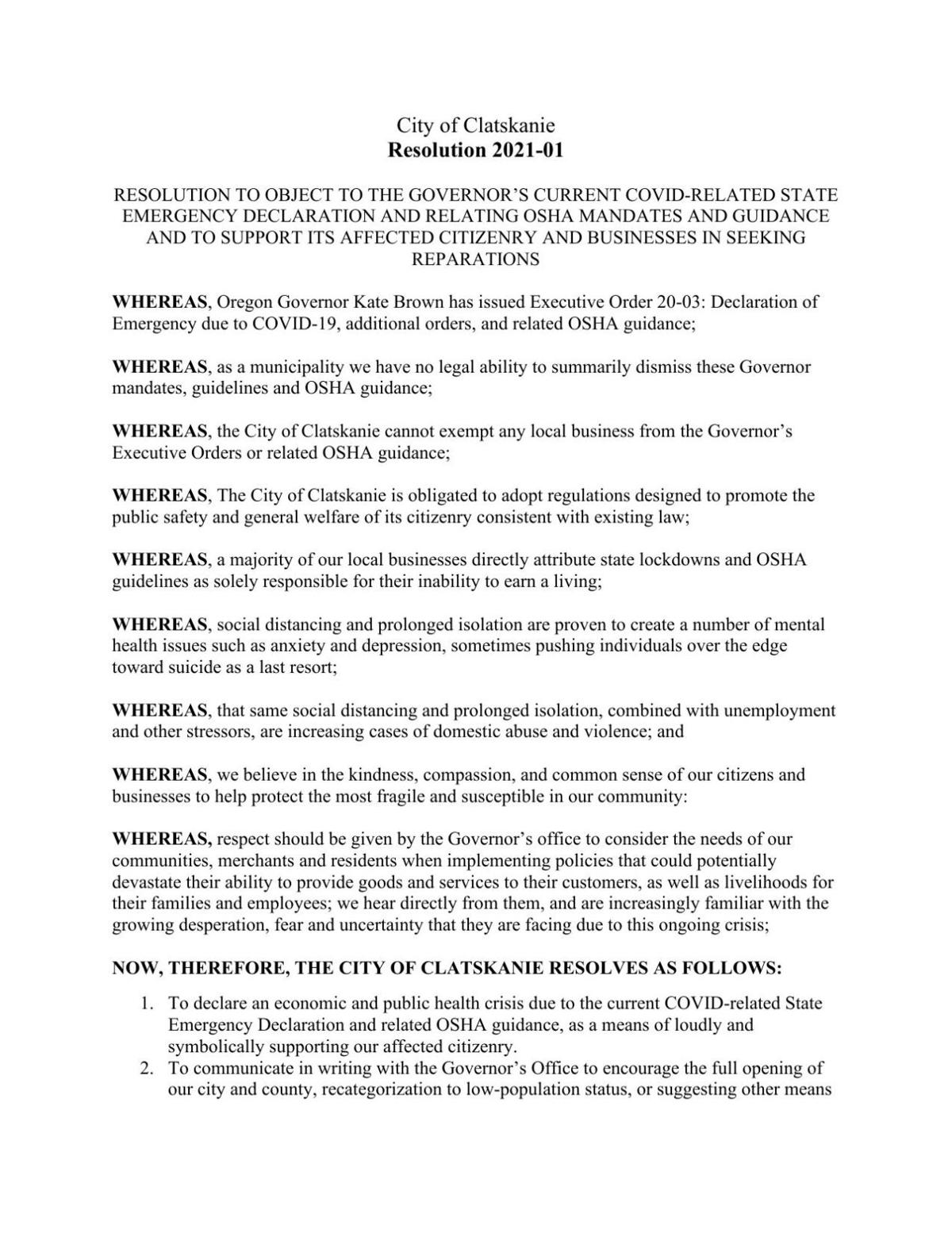 “Their anger was not directed at the council but at Governor Brown,” Hinkelman said. “People are fed up with the lockdowns. A majority of the people were small business owners who are directly affected by these shutdowns.”

Hinkelman said so many people attended the Wednesday night meeting, the council had to move outside city hall into the adjacent parking lot to allow everyone to speak on the record.

“The mayor took public testimony for about an hour and then we moved the meeting back into the building where the council deliberated for a lengthy time on the resolution and than voted unanimously to accept it,” Hinkelman said.

The Clatskanie council is also writing to Brown encouraging the full opening of the city and the county and asking for a re-categorization to low-population status, or suggesting other means necessary for citizen relief.

In an unexpected announcement, Oregon Governor Kate Brown has eased pandemic restrictions for Columbia County, allowing the county to move back to High Risk under the state's COVID health and safety classifications.

Columbia County had been placed at Extreme High Risk on April 30 due to rising COVID cases and hospitalizations.

The Extreme High Risk classification increased public and businesses health and safety requirements and limitations, including a ban on indoor dinning.

With the statewide seven-day average increase for hospitalized COVID-19 positive patients dropping below 15 percent, Oregon no longer meets the statewide metrics for the Extreme Risk level.

Effective Friday, May 7, 15 counties, including Columbia County, will return to High Risk. In total, 24 counties will be at High Risk, four at Moderate Risk, and eight at Lower Risk.

“Let me be clear: across the state, COVID-19 cases and hospitalizations are still high, and Oregon is not out of the woods yet," Brown said. "However, we have met the hospitalization metric established by our health experts for counties to return to High Risk.”

Brown said that with the statewide hospitalization rate stabilizing, hospitals should have the capacity to continue treating patients with severe cases of COVID-19 and other serious medical conditions in the coming weeks.

“With Oregonians continuing to get vaccinated each week, my expectation is that we will not return to Extreme Risk again for the duration of this pandemic,” Brown said.

Brown’s announcement follows increasing concern and criticism from elected officials, the hospitality industry, gym owners and others frustrated with the restrictions and limitations of the state’s county risk classifications.

Eighteen elected officials in Columbia County, including Clatskanie Mayor Bob Brajcich and Rainier Mayor Jerry Cole, sent a letter to Brown April 30, expressing their concerns about what they said are the pending closures of businesses impacted by the state's pandemic health and safety county classifications.

"Our neighbors share our frustrations with us," the letter states. "Our business owners come to us with questions about how they will be able to operate under continued restrictions."

The elected officials letter states that many citizens and businesses initially understood the COVID-19 health crisis as it spread across the state last year.

"They were willing to do what they could to help minimize risks to their families and customers," the letter reads. "Their struggles were evident in the emptiness we saw in our commercial corridors for months on end."

The letter said the community job creators have patiently followed the health and safety guidelines and eager to phase-in their operations over time and they invested in their businesses when they were finally allowed to re-open. Staff was brought back and new employees hired to fill vacancies.

"We would ask that instead of emphasizing shutdowns that the state focus its priorities on ensuring the widespread distribution of available vaccines, especially to the rural parts of Oregon," the letter states.

The elected officials letter follows a letter sent last week by the Oregon Restaurant and Lodging Association and also signed the Columbia County Board of Commissioners and 78 other elected officials, asking Gov. Brown to reconsider the risk classifications.

In response, Brown said during a media briefing April 30 and through a letter to Oregon county officials, that she needed to move forward with the risk classifications in the state’s efforts to slow the pandemic.

"I chose to save lives," Brown said, adding that based on the information at that time concerning virus variants, COVID case increases and hospitalizations, moving Columbia and 14 other counties to Extreme High risk classification was best for the health and safety of Oregonians.

In her May 4 announcement about removing the counties from the Extreme High risk classification, Brown also announced that the Biden-Harris administration will be reallocating unused vaccines to the states that need them.

“Oregon will ask for the maximum allowed, which will help us to get shots in arms faster,” Brown said. “Vaccinations are still our best path to protecting our loved ones, and staying on track to fully reopen our economy by the end of June.”

Follow daily pandemic updates at thechiefnews.com with in-depth reports in the Friday print editions of The Chief.