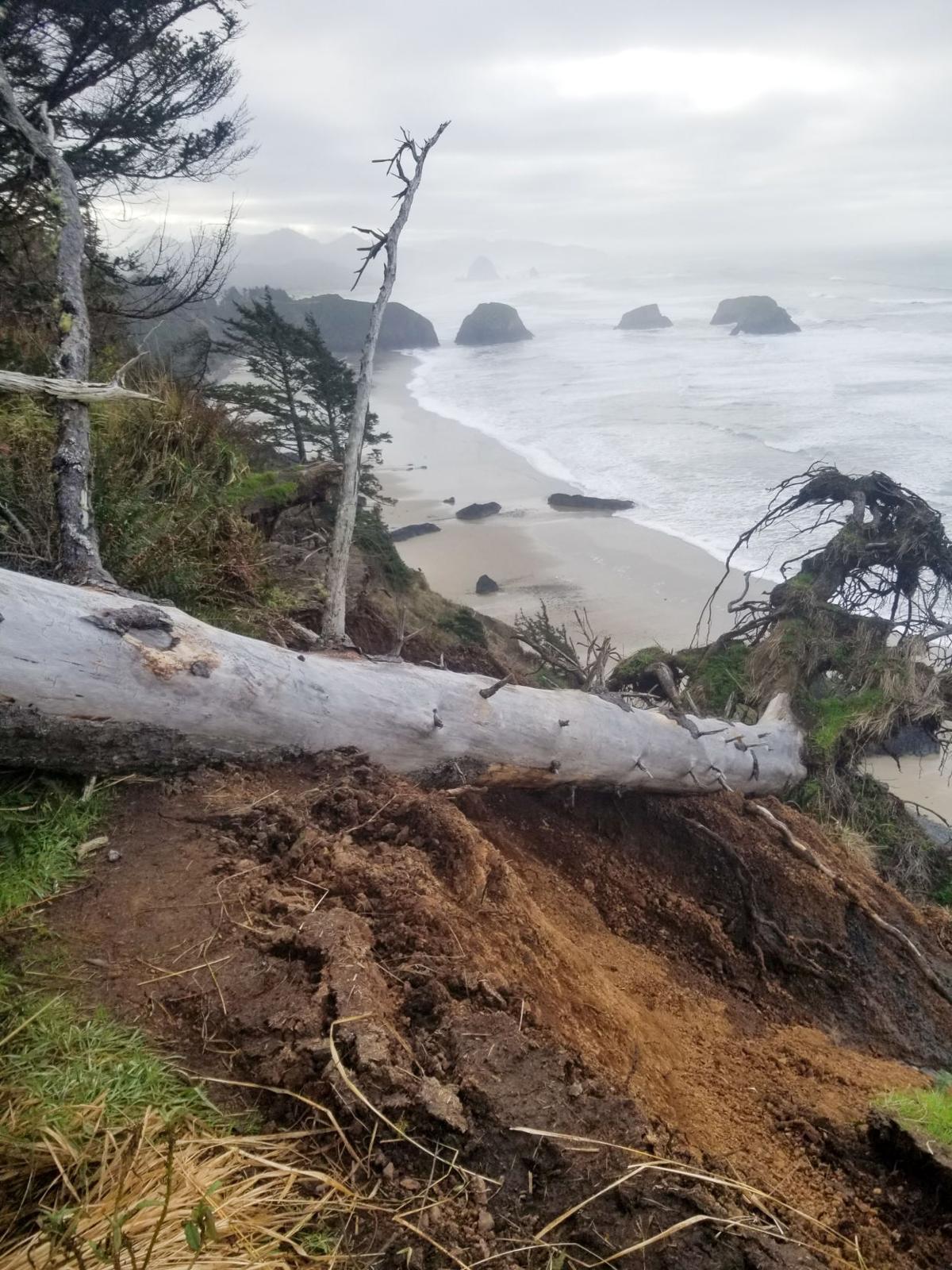 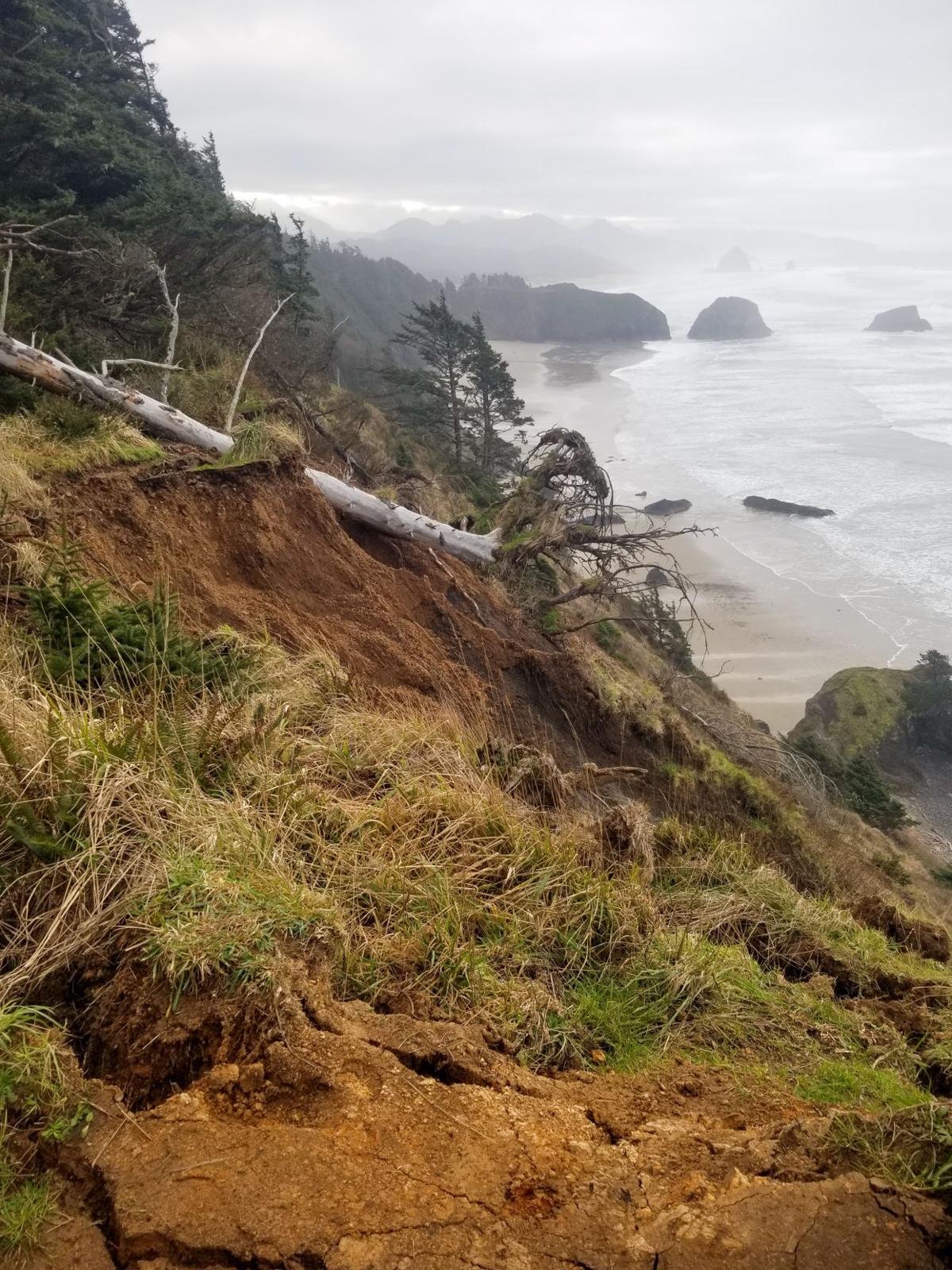 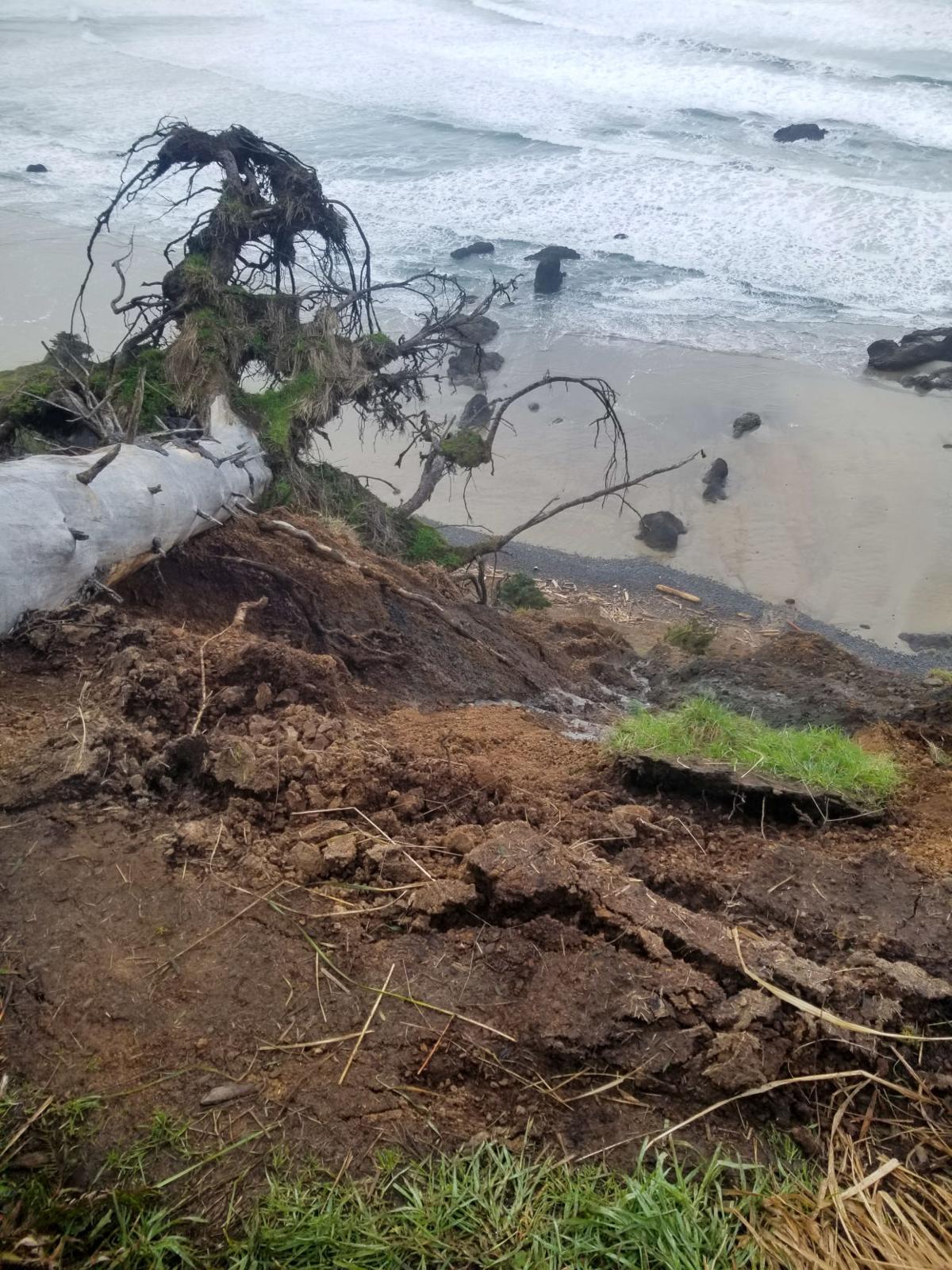 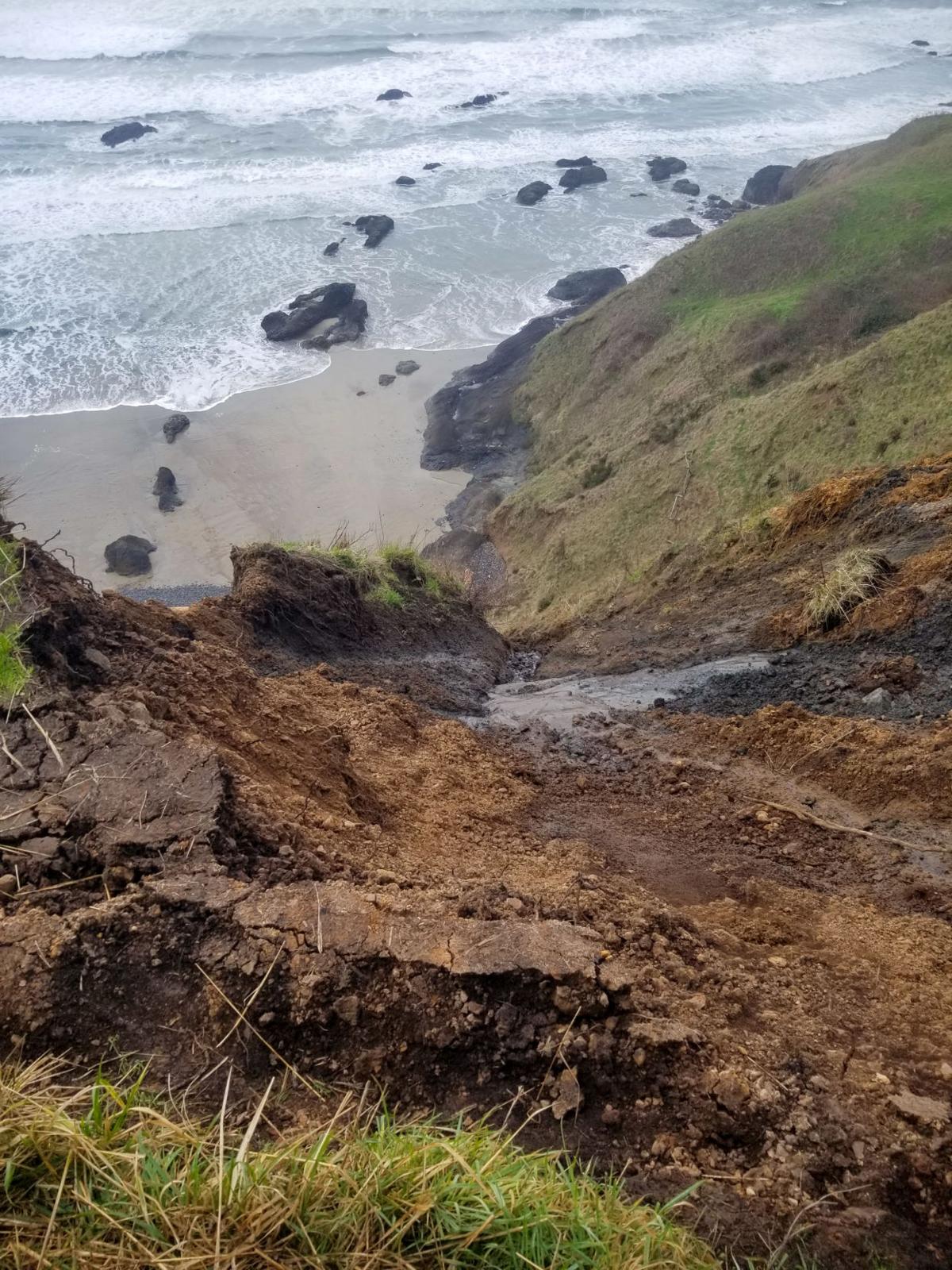 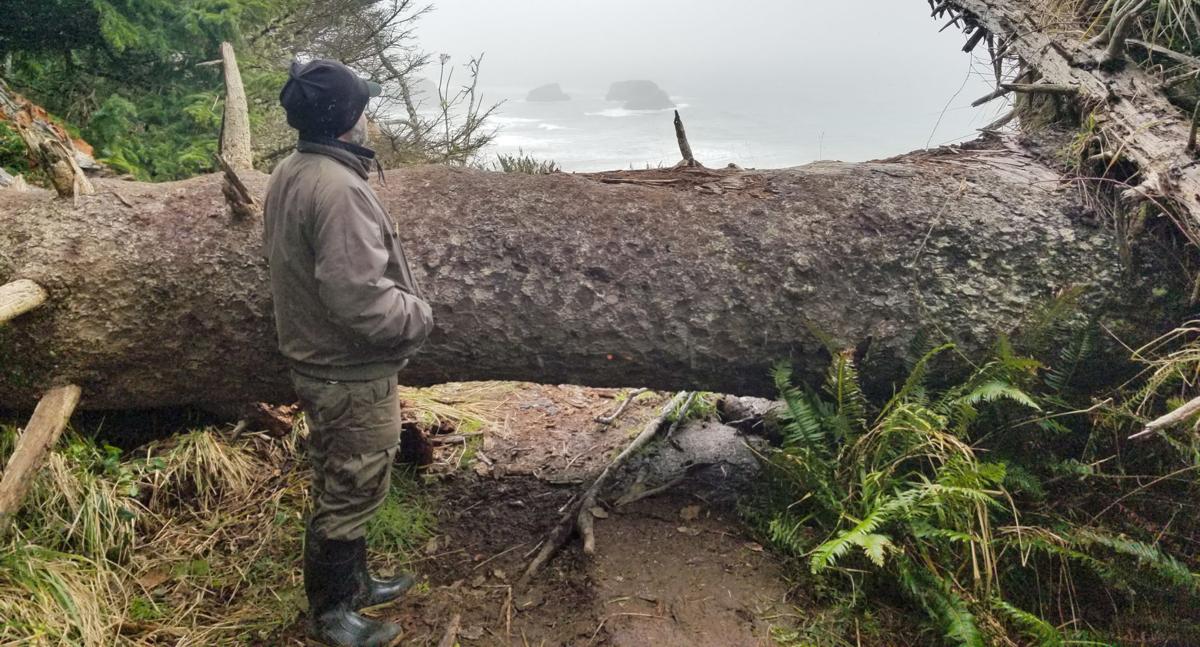 The park remains closed south of Indian Beach Day-use Area. on Tuesday, Feb. 11, park rangers discovered a roughly 100-foot section of the Crescent Beach Trail had slid over the cliff. The hillside may still be susceptible to slides. Park rangers will continue to monitor the trail and entrance road over the next several days.

Visitors may still access the park’s Indian Beach Day-use Area via the Tillamook Head Trail, but cannot travel farther south into the park.

The park was closed off Monday, Feb. 10, following an earlier hillside slide that damaged a section of the park’s sole entrance road.

The affected section, an old repair made from compacted gravel, was damaged again over the weekend by the sliding hillside beneath the road. Efforts to shore up the section failed, and the gravel surface became uneven and unsafe.

Parks Manager Ben Cox said constant, heavy winter rains are known to cause problems on sections of the road.

"Some winters are worse than others," he said. "We anticipate at least some damage each winter, but there’s really no way to prepare for it until it happens."

Cox said each event varies in severity, specific location and duration, meaning each response is different.

"In this case, soils in a very active slide complex became heavily saturated and that, coupled with vehicles regularly traversing the popular park road, caused sections to slump and slide in many places," Cox said. "It’s much the same as Highway 101 between Cape Foulweather and Newport, although on a smaller scale."

According to Cox, there was enough movement in the earth that the park's main water supply line was literally pulled apart. There is no drinking water coming into the park and the restrooms have been shut down. A drainage culvert under the roadway also separated, creating a small sinkhole in the center of the travel lanes.

Cox said State Parks has hired a contractor to repair this culvert, then place and compact more surface rock. The repaired area has since slipped again, although the culvert appears to have remained intact, according to Cox.

"We need to engineer a better way to effect temporary repairs on this road," Cox said. "We have a geo-technical report that tells us long-term repairs would be extensive and very, very costly. Those will likely never happen because there’s no way keep the mountainside from moving. It would be an expensive gamble and likely not the best use of public funds.

Cox said asphalt and concrete surfacing is heavy and adds to the weight burden which can cause faster shifting.

"We’re engaging road engineers and geologists to give us a better method of mitigation and response when these events occur," he said. "In other words, we’re asking, “what’s the best temp fix we can implement and maintain for the long term?”

The hillsides do not appear to pose an imminent threat to people or property, other than the roadway itself, according to Cox.

"There are no additional steps being taken as none are indicated at this time," he said.

The length of the closure at Ecola State Park is unknown at this time.

“We’re still evaluating the extent of the road damage and forming a plan for repairs,” Cox said. “The land may continue to slide too, so we’re being cautious.”

Park rangers safely escorted all visitors out of the park Sunday afternoon. The sliding hillside also disconnected the park’s main water line, which shut off running water in the park.

Landslides: What you need to know about the danger

Do you believe additional security is needed in our schools?

Who We Are: Where Passion Meets Purpose

Video / Did You See This? Sea lion in the roadway

Who We Are: Where Passion Meets Purpose

Video / Did You See This? Sea lion in the roadway

Up the Ladder: Pinned man rescued