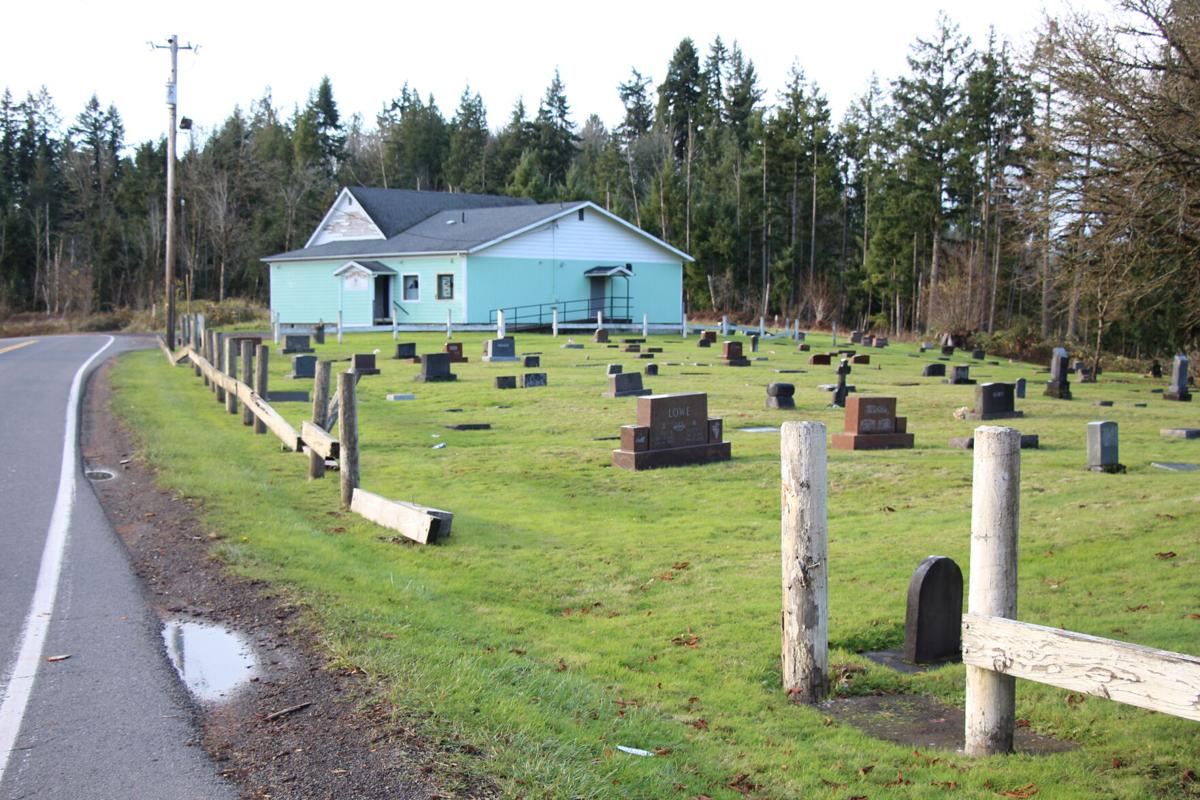 The fence at Woodbine Cemetery in Rainier has been hit several times by speeding vehicles, said Rainier Cemetery District Board Member Judy Lepin. The sexton cannot keep up with repairs to the fence with all of his other duties. 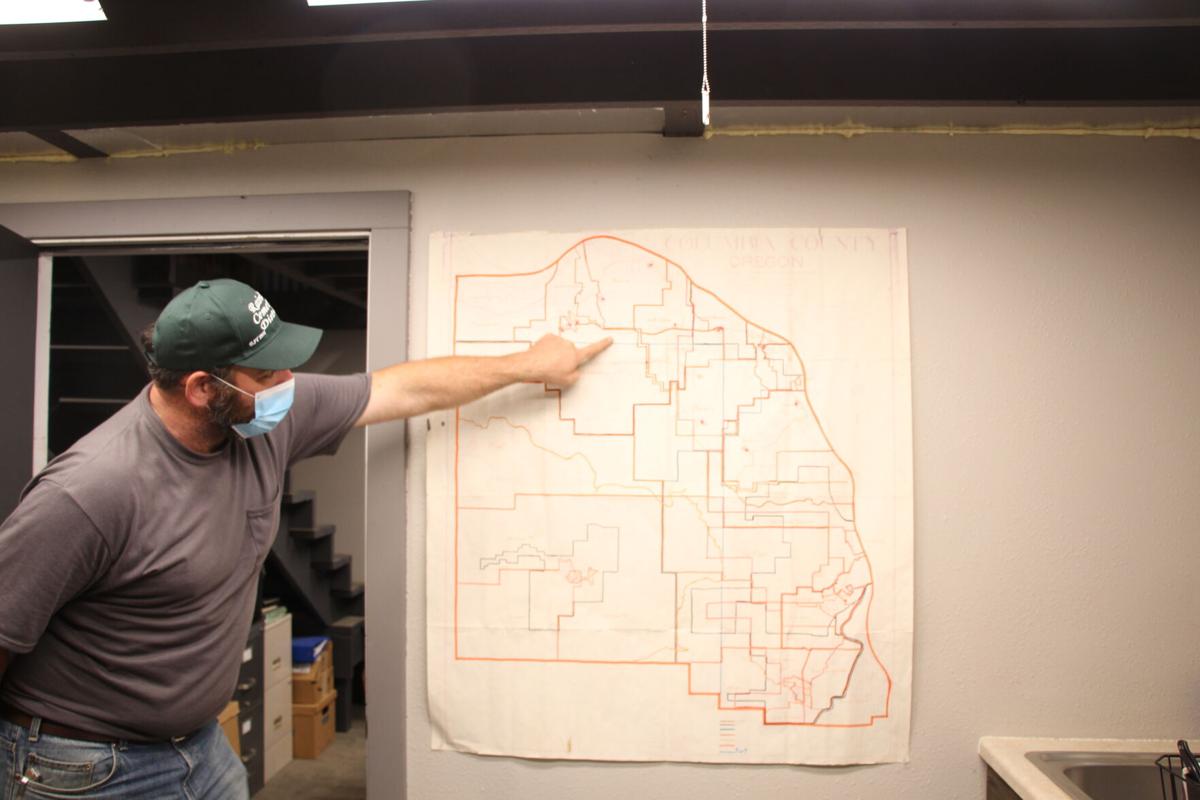 Sexton Kevin Crawford maintains 12 cemetery sites covering 30 miles of ground between Clatskanie and Rainier. He is the only employee of the Rainier Cemetery District.

Faced with an increasingly tight budget, aging equipment and no support from its voting district, the Rainier Cemetery District is making some cuts to make ends meet.

The district owns and maintains 12 cemeteries in Rainier and Clatskanie and is supported in part through property tax funds.

In the past five years the district has proposed three separate measures to increase funding but voters in the district have not approved any of them. The most recent measure failed in the Nov. 3 election. It asked for a $0.05 per $1,000 assessed property value increase.

Approximately half of the district’s budget is from property tax funds, around $67,000 a year. The other half is generated from sales and service income.

To cut back, the district will be moving their one full time employee, Sexton Kevin Crawford, down to part time beginning in January.

While Crawford is working part time he will only be handling burials, record keeping and appointments, not performing maintenance on the sites. They hope by around March he will be able to work full time again.

“The question I get a lot is ‘Why does the funding have to come from property taxes?’ That's a good question, none of us like to see property taxes go up, but when you look at the small amount that property taxes that go to the district compared to other things, it’s not very much,” Crawford said. “It’s really not a lot for whats got to get done with it. I think that’s where there’s a misconception.”

For Rainier Cemetery District Board member Judy Lepin, it’s frustrating that the scope of work involved in maintaining the district properties and keeping up with the administrative work isn’t better understood.

“People don’t understand; they think he’s negligent because they see all of the disrepair in our cemeteries,” Lepin said. “It’s going to be really hard for him to come back on a part time basis and have to deal with the mess we’re going to have in catching up with a wet spring.”

A lot of ground to cover

The cemeteries span across 30 miles in the county, which is a lot of ground for one man to cover, Lepin said. She said Crawford takes pride in his duties as sexton and wants the cemeteries to look good and be cared for, but it’s not always possible with the resources the district has to its avail. The hope is that with the money saved from having Crawford on part time through the winter months they will be able to afford to hire part-time assistant to help him prepare the sites for spring and summer.

“This last year was the worst I think it’s been. Memorial Day is the big day, but you also have Mother’s Day and Easter that people expect the cemeteries to look good for … Those they didn’t look good for, so we had a lot of complaints,” Crawford said. “We were just running frantic. I didn’t hire any help this last year. It would look very similar this year, except I wouldn’t have anything else caught up.”

Crawford said it takes between six to eight days for two people to mow all of the properties, which totals to roughly 39 acres. With just one person, and maybe some volunteers, he estimates it takes between 10 to 12 days.

“So that’s just mowing, that’s not trimming,” Crawford said. The process usually begins in February when Crawford begins to clear fallen limbs and brush from the cemeteries, which he doesn’t anticipate having enough time to do this upcoming year when he’s only working part time and keeping up with his administrative and burial duties.

“That’s going to have a noticeable impact,” he said.

Maintaining the cemeteries is only one part of his job. He is also responsible for recording each burial, handling public inquiries, selling gravesites, and preparing graves for burial. When he schedules a burial he prioritizes work at that cemetery to make sure it looks nice for the service, and with all of the work that goes into getting a cemetery ready, said sometimes even a week isn’t enough time for one person to do all of the work required.

With the help of an assistant, Crawford could divide the tasks up so he could handle the administrative work of a burial while the other worker prepares the site. While the district has had help from volunteers, work parties require Crawford’s supervision, training and equipment, which is hard to schedule on top of his burial and administrative duties when he’s reduced to working three days a week. It also doesn’t help that only one out of the district’s three lawn mowers is currently working, so even with extra hands there are limits on how much can be done.

“There’s definitely a time and place for that, but what’s really going to help us is paying the bills,” Crawford said.

The district was hoping to replace some of the aging, heavily used equipment if the measure was approved, but now doesn’t have room in the budget.

As a result, plot prices will increase “substantially,” Crawford said. The district board voted on Monday, Nov. 23, to approve a $150 price increase to the cost of gravesites for both caskets and urns which take effect on Jan. 1. They will also offer 25% off the price of an additional gravesite with each purchase beginning in the new year, Lepin said.

The increased costs will hopefully allow the district to repair or replace some of the equipment, Crawford said. Most of the tools he uses to maintain the sites or dig graves was purchased in the last 15 years, but heavy usage has caused the items to incur problems quicker.

“We can’t make up the difference that we need by just raising prices, but it’s going to help,” Crawford said. “We’re a little behind with that, with prices, in the area.”

Of the approximately 13,000 plots between all the cemeteries, about half of them are full and Crawford estimates there are around 70 burials per year. Lepin estimated there are only about 20 gravesite sales each year, and said many of the burials are in pre-bought sites.

Even as spreading ashes and forgoing traditional burials has become more popular, both Crawford and the district Lepin hope the community realizes the value of preserving and maintaining the graveyards. It’s about respecting the dead and caring for the community, Lepin said.

“We want to keep the cemeteries alive,” Lepin said.

“We want to keep the cemeteries alive.”