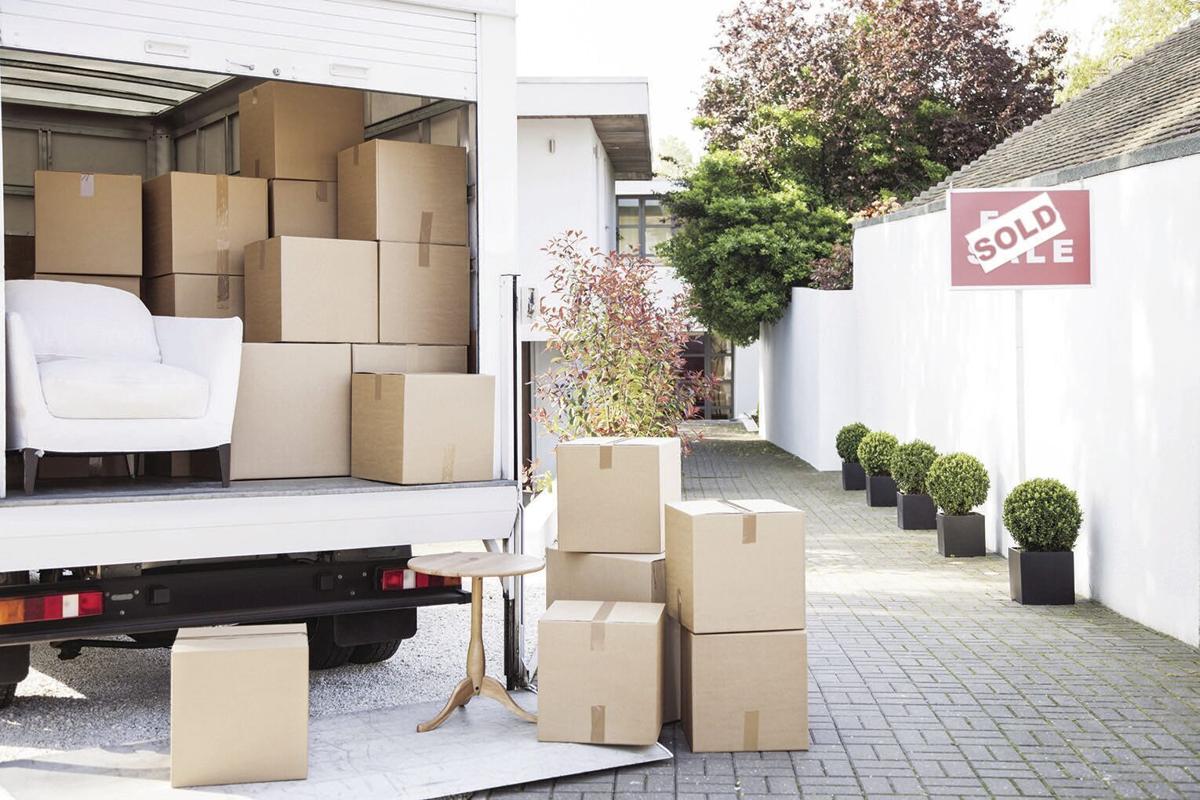 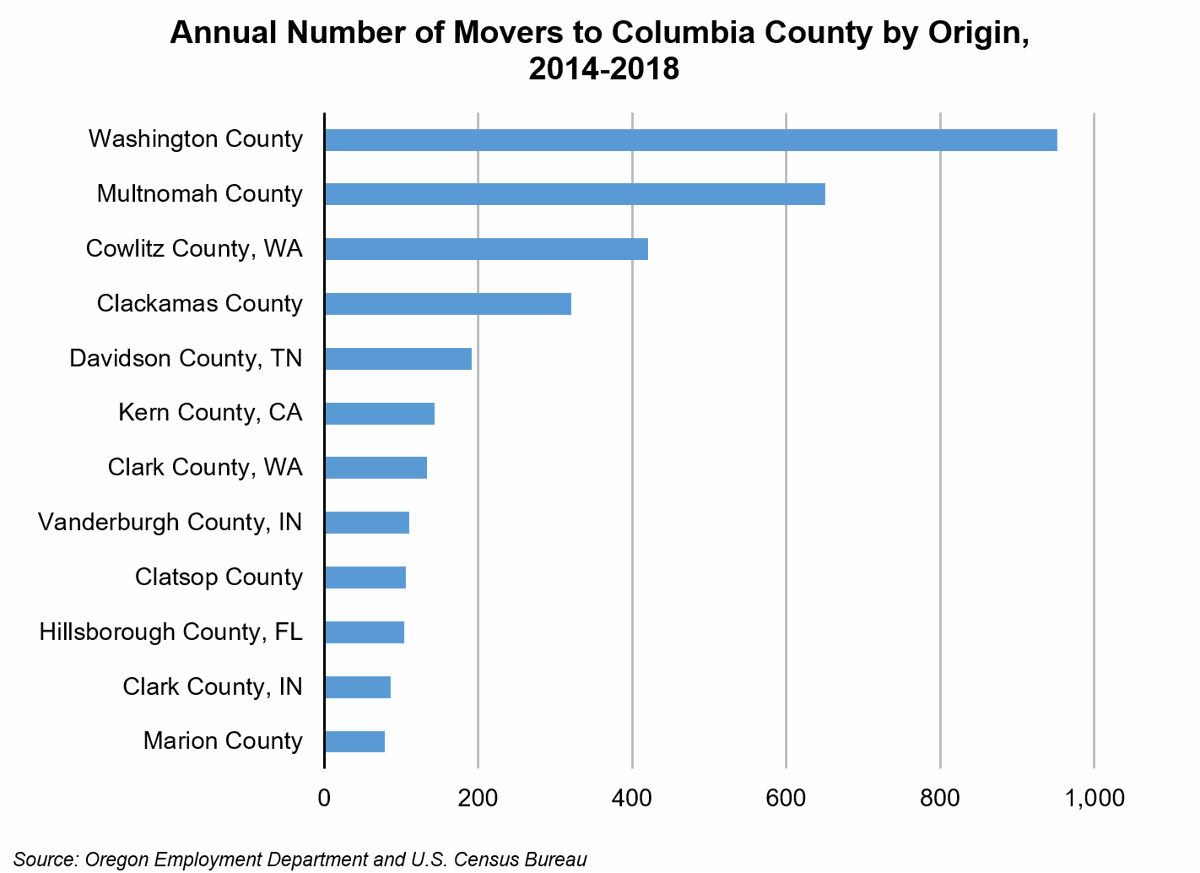 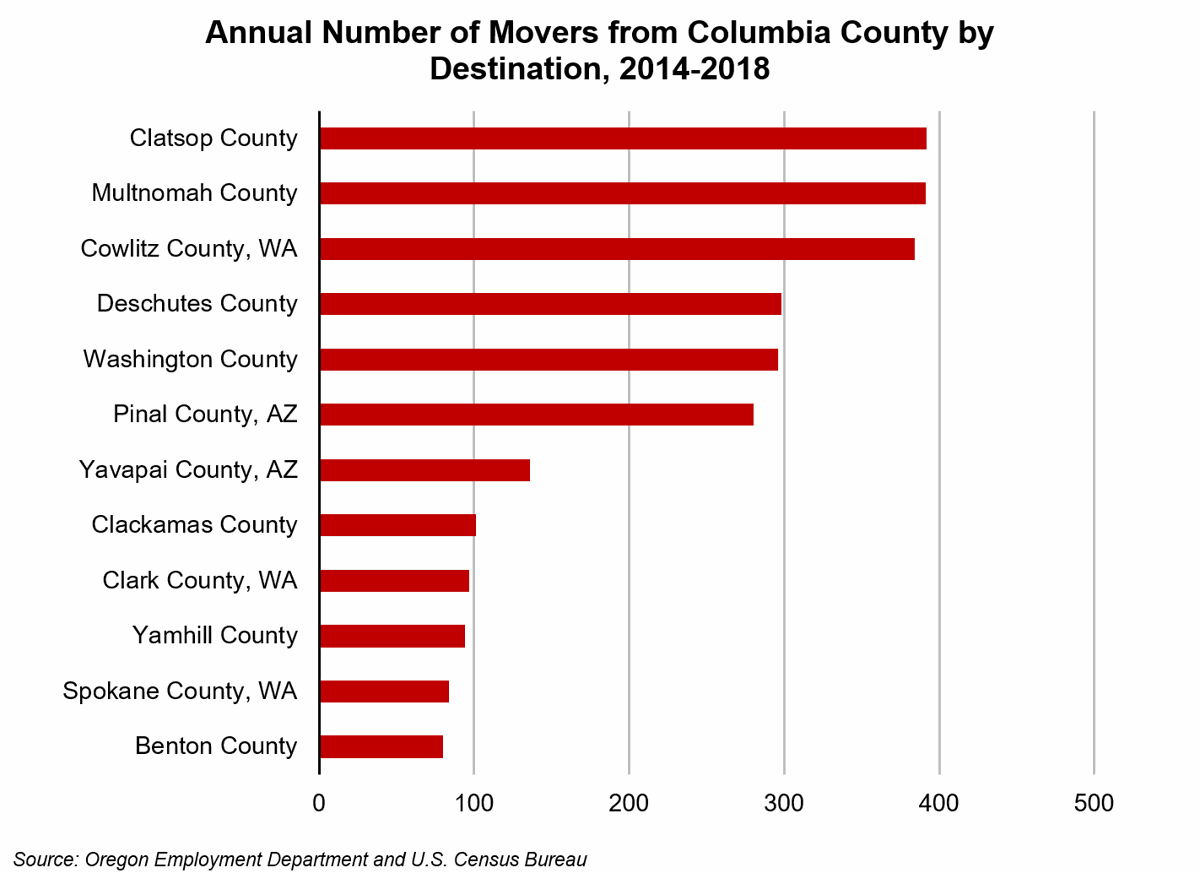 Fewer people seemed to move to Northwest Oregon in 2019 compared with one year before.

Population estimates from Portland State University indicate net in-migration of about 2,177 people to our region in 2019. This was down from 2,652 in 2018, and it mirrors the drop in net in migration that happened statewide.

Columbia County’s estimated annual in-migration from 2014 through 2018 was about 4,645. About 46% came from outside of Oregon. Washington and Multnomah counties each supplied more immigrants than any other single place. This is not surprising considering the large number of Columbia County residents who commute to jobs in those two counties.

Cowlitz and Clark counties in Washington are across the Columbia River and are part of Columbia County’s commute shed and important sources of migrants. Parts of Columbia County function as bedroom communities for the metro job market. Metro workers move to Columbia County to find affordable homes and more relaxed, small-town lifestyles.

The distribution of people leaving Columbia County was dominated by people moving to surrounding counties. Clatsop, Multnomah, and Cowlitz counties were top destinations.

About 3,840 people per year moved into Clatsop County from 2014 through 2018. Roughly 54% of these people came from outside of Oregon, which is not too surprising considering Astoria’s appeal as a retirement destination. But most of the largest source counties were in nearby metro counties or in neighboring Washington State. Columbia and Washington counties were the top sources for people moving into Clatsop County.

Lincoln County had about 4,031 in migrants on average per year for the years 2014 through 2018, with 47% coming from out of state. Although Multnomah County was by far the largest single source, Lincoln County had a good variety of in-migration sources. Lincoln County attracted people from up and down the western U.S.: Washington, Texas, and California contributed a significant number of migrants to Lincoln County.

About 3,252 people left the county annually from 2014 through 2018. About 35% of the out-migrants moved out of Oregon. Portland and nearby metro areas were common destinations, as were nearby states.

Tillamook County has a smaller population than the other counties in Northwest Oregon, and its migration is correspondingly smaller. Total in-migration was about 1,537 on average per year from 2014 through 2018. About 63% of those Tillamook County immigrants came from other counties within Oregon and 37 percent came from other states or countries. Nearby counties contributed most to the county’s in-migration.

Multnomah and Washington counties in Oregon, and nearby Clark County in Washington were the top three sources for migrants. Tillamook County had the highest share of migrants coming from within the state out of all the Northwest Oregon counties.

As the biggest county in Northwest Oregon, and home to Oregon State University, it is no surprise that Benton leads in migration. About 12,500 people per year on average moved into the county from 2014 through 2018. Somewhat more surprising to many people may be that Asia was the third-largest single source of immigrants to the county.

It would not be a surprise to Oregon State University administrators who know that 3,461 foreign students were enrolled in fall of 2019, with 1,390 of them from mainland China. About 800 people per year sacrificed their loyalty to the University of Oregon Ducks and moved from Lane County to their rival’s turf – home of the Beavers (Go Beavs!).

Portland metro counties supply many of OSU’s students and that is reflected in the in-migration data; Washington, Clackamas, and Multnomah were all major sources of migrants.

Migration estimates at the county level should be taken with a grain of salt. For many county-to-county estimates the margin of error is slightly larger than the estimate. This can lead to some questionable estimates, especially for the out-of-state counties.

It would be quite surprising if 272 people moved every year from Lincoln County to DeKalb County, Missouri as the estimates report. It is more probable that a group or family moved one year and they all got included in the sample, and skewed the results, especially since the margin of error on this particular estimate is 282.

Still, the results generally show that adjacent counties and nearby metro areas are most important when examining migration patterns. One clear value of the migration data is that it serves as a reminder of how mobile our society is. And more specifically, how mobile our workforce is.

See more the migration graphs for Clatsop, Benton, Lincoln and Tillamook Counties with this story at the chronicleonline.com.

Erik Knoder is a regional economist with the Oregon Employment Department. He may be reached at 541-351-5595.

Do you agree with Gov. Brown’s 2-week Oregon Freeze to slow the pandemic?

Out and About: State parks, ODFW offer free fishing days