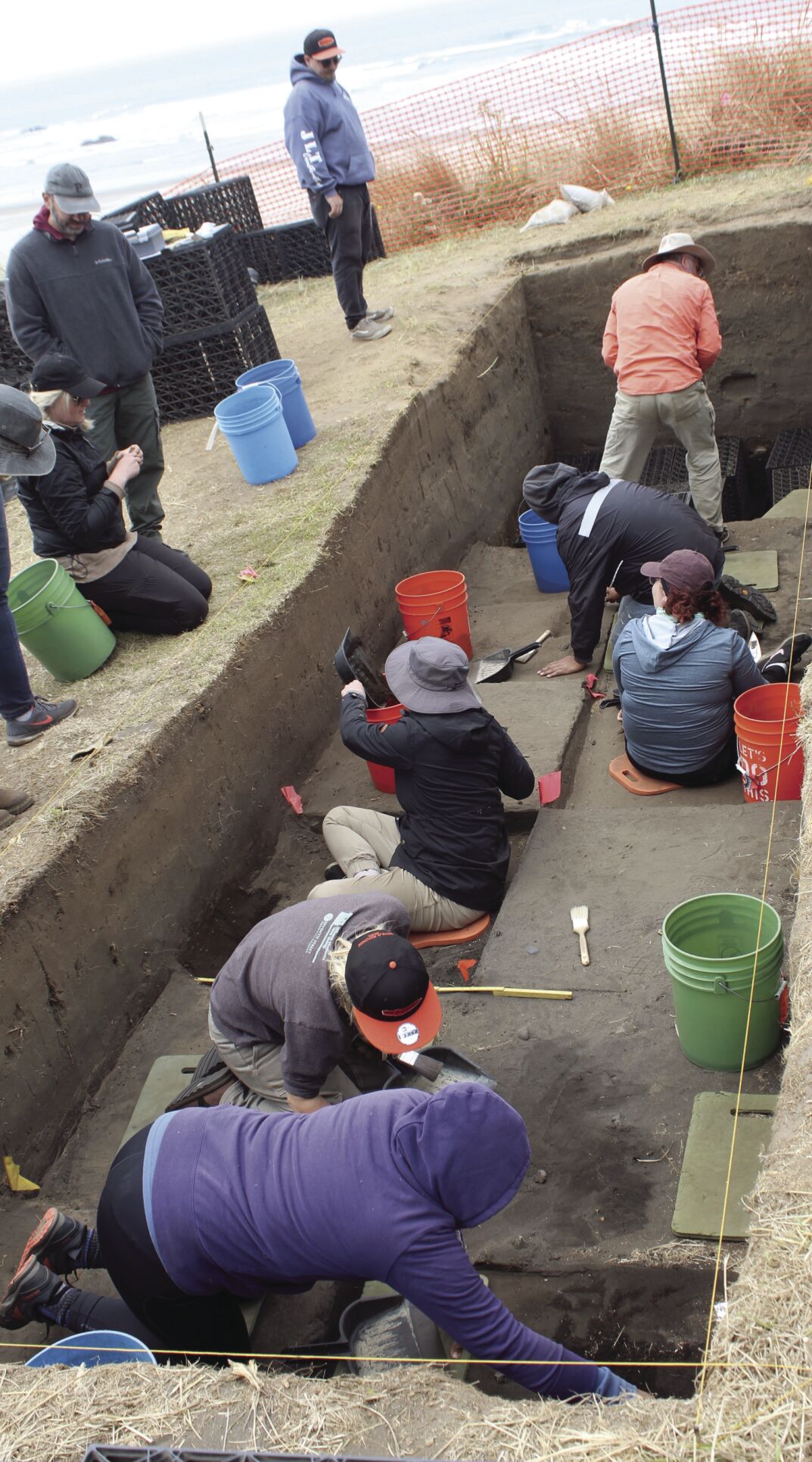 Students from Oregon State University dig through the dirt at Devil’s Kitchen while looking for artifacts related to the Coquille Indian Tribe. 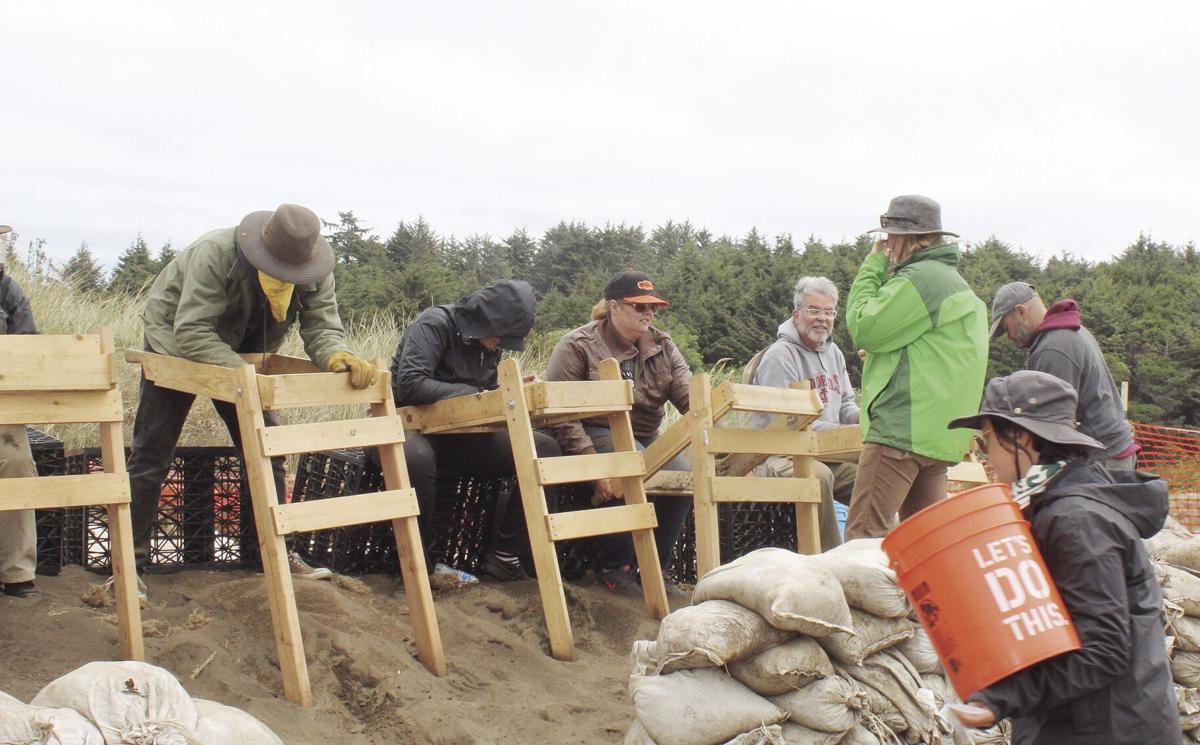 Oregon State students sift dirt at the site of an archeological dig in a search for even the smallest artifacts. 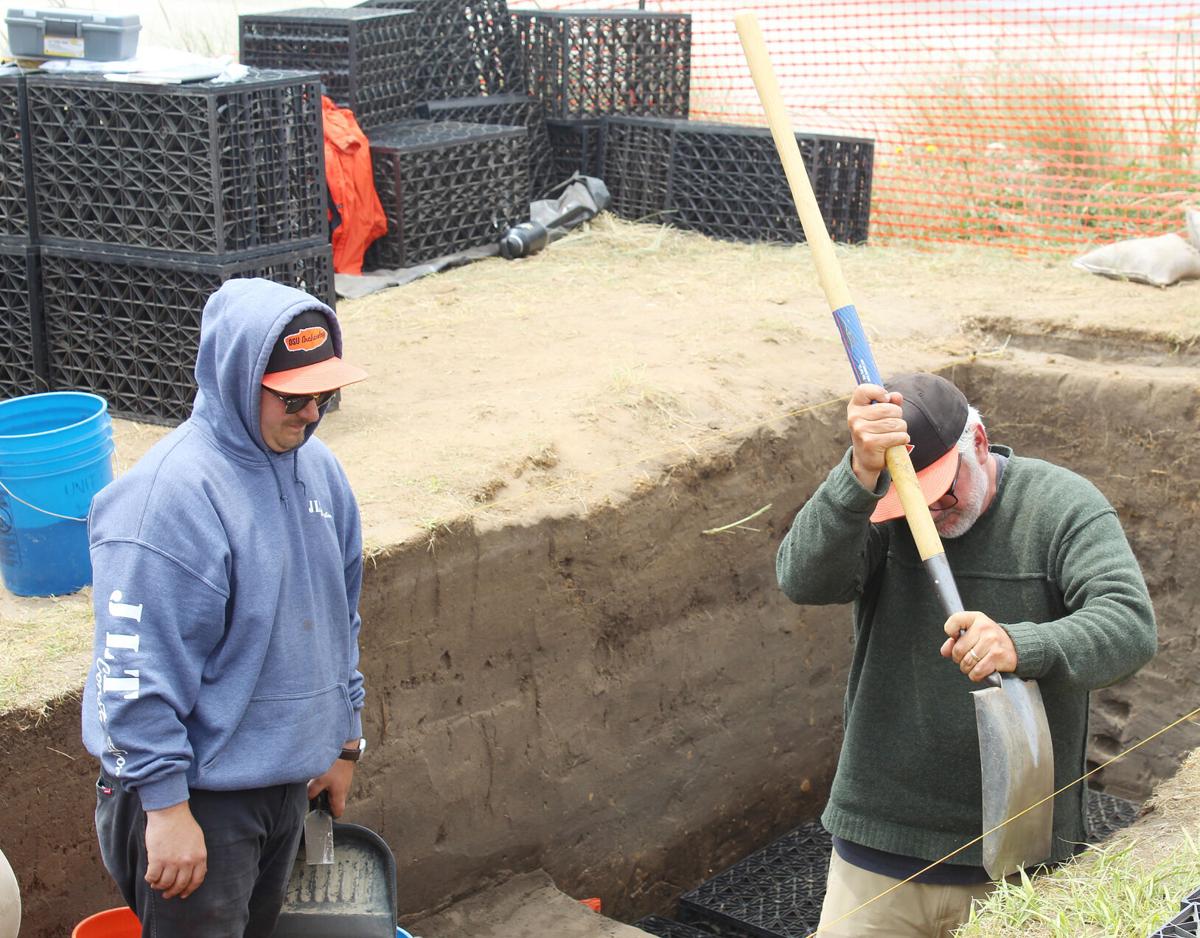 Loren Davis, right, a professor of anthropology at Oregon State University, removes dirt while conducting an archeological study at Devil’s Kitchen in Bandon.

What's happening along the South Oregon Coast could have a direct impact of the state's history and future.

Almost everyone agrees, the Coquille Indian Tribe was the first settlers in what is now the Coos Bay-Bandon region of Oregon.

What we may be learning is how long the Tribe has had a presence in the area.

For the last three weeks, archeology students from Oregon State University have been excavating a site near Devil’s Kitchen beach in Bandon. The excavation is the fourth time OSU students have worked to learn about the history of the area, and what they have found could be extraordinary.

Loren Davis, a professor of anthropology at OSU, said artifacts found at the digs have been dated back 13,600 years.

“This is the ancestors of the Coquille people,” Davis said. “That pit in there goes down to 10-feet deep. Down there, we have radio carbon going back 13,600 years. If that’s true, this would be the oldest archeological site on the coast of North America. We have more work to do.”

On Monday, the students and Davis were back at the site, slowly removing soil inch by inch. The slow, detailed work is necessary to find, protect and record any signs of human activity. Davis said the archeology students look for things most people would miss. For example, a rock that looks to most like a rock, could have significance to archeologists because it might show signs of one time being in a fire.

Students pulled out several fire rocks, along with charcoal, while excavating the site Tuesday. The whole time a representative of the Coquille Tribe was watching closely. The Tribe wanted a representative nearby to learn and to ensure artifacts were treated properly. If human remains had been found, and none have in the four years of digging, work would have stopped immediately.

Davis said students from OSU have dug at Devil’s Kitchen in 2000, 2011 and 2013. The 2021 dig is the first time many students have been outdoors doing a real excavation in more than a year due to COVID-19 restrictions. Davis said getting the students back out into the field is a big step toward making them archeologists.

“We get to be outside, you’re working with other people and you live in a field camp,” he said. “There’s a lot to learn other than archeology.”

At the site, students slowly dig into the soil, placing all the dirt into buckets. Each bucket was then sifted through to look for even the smallest artifact. Davis said every piece that was found helps tell the story of the area.

“In the years, we were doing some testing to get an idea of what was here,” he said. “During the excavation, we realized there was a relay long record of people being here.”

Davis said while the artifacts go back more than 10,000 years, most of the confirmed activity at the site is newer.

“The most intensive use of the site in the last 3,000 years,” he said. “It would be ancestors of the modern Native American people.”

While the students from Oregon State have permission to find, remove and map artifacts they find, Davis urged anyone else who finds artifacts to leave them where they are.

“Artifacts on public lands are protected by state law,” he said. “What they can do is they can take a picture of it to enjoy it later. They can also contact the agency that owns the land. If you pick something up and take it, you’re erasing history.”

And every piece of that history is important to understand the people who came before us. As archeologists, the challenge is getting enough pieces to tell the story, Davis said.

“It’s one piece of a larger puzzle of what people were doing,” he said. “It isn’t like one piece tells the entire story. We’re trying to piece it back together again. We want to map where everything is in the ground.”

At Devil’s Kitchen, the archeology students were excavating a piece of land up above the beach. To their south ran Crooked Creek. Davis said it is likely the creek ran through the area they were digging at before it changed routes.

When the students finish their dig this week, they will fill in the hole. Davis said every dig is filled in for safety and aesthetics. While this group of students will return home for the rest of the summer, Davis and the Oregon State program will move to Eastern Oregon and start searching in a new location.

Are you taking any new precautions due to the sharp increase in COVID-19 cases?

Drones: State to clarify use of piloted crafts in parks and along ocean shores

No Stopgaps: City council reverses decision on NEXT

Drones: State to clarify use of piloted crafts in parks and along ocean shores

No Stopgaps: City council reverses decision on NEXT